“Words and the music of words are closest to my heart.” – Jerry Pinto (Poet, Author, Translator) 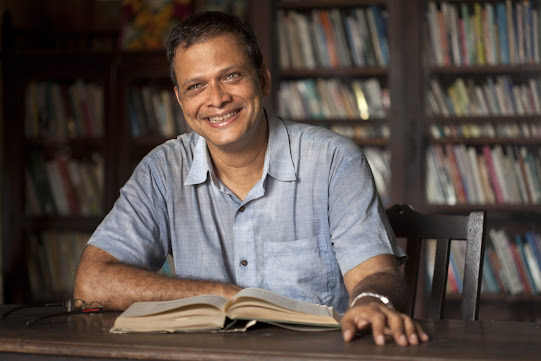 Team Kitaab is in conversation with award-winning writer, translator and poet Jerry Pinto where he speaks about his love for writing, his inspiration behind all his work and the changing scenes within the publishing industry.
Jerry Pinto is an award-winning writer and translator based in Mumbai. His works include Helen: The Life and Times of an H-Bomb (2006), which won the Best Book on Cinema Award at the 54th National Film Awards, Surviving Women (2000) and Asylum and Other Poems (2003). His first novel Em and the Big Hoom was published in 2012 and won The Hindu Literary Prize that year. It was also shortlisted for the Commonwealth Book Prize.
Pinto won the Windham-Campbell prize in 2016 for his fiction. He was awarded the Sahitya Akademi Award in 2016 for his novel Em and the Big Hoom. He has translated several books from Marathi to English including Cobalt Blue, Baluta, When I Hid My Caste and I, the Salt Doll. His collection of poems, Asylum and Other Poems appeared in 2003. He has also co-edited Confronting Love (2005), a book of contemporary Indian love poetry in English. Some of these poems are to be found in Reasons for Belonging; Fourteen Contemporary Indian Poets edited by Ranjit Hoskote.
His poems are also to be found in Fulcrum Number 4; An Annual of Poetry and Aesthetics (Fulcrum Poetry Press, 2005) edited by Jeet Thayl; in Atlas; New Writing (Crossword/Aark Arts, 2006) edited by Sudeep Sen; and Ninety-nine Words (Panchabati Publications, 2006) edited by Manu Dash. Having recently read and enjoyed Pinto’s poetry collection Asylum and other Poems & I want a poem and other Poems by Jerry Pinto, Team Kitaab had the opportunity of interacting with him and knowing more about him.
Read the full interview on Kitaab.
Email Post
Labels: 2021 Author Interview Jerry Pinto