Book Review: Women Who Wear Themselves – Conversations with Four Travellers on Sacred Journeys by Arundhathi Subramaniam

Namrata reviews Arundhathi Subramaniam’s Women Who Wear Themselves (Speaking Tiger, 2021) and observes how this book is a beautiful reminder of the fact that not every journey is meant to be taken physically. 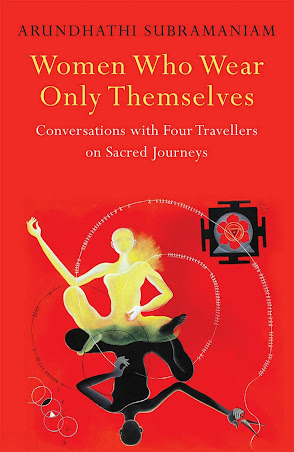 The journey of a woman as per the societal norms consists of birth-marriage-children-death. Anything and everything beyond these four milestones are considered to be path-breaking (literally and otherwise too!) We are in the 21st century and we still raise eyebrows for women who choose a career, decide not to get married or have children or make any such independent choices that define their lives strongly. Now imagine women choosing the path of spirituality amidst this. Award-winning author and poet Arundhathi Subramaniam’s latest book Women Who Wear Only Themselves is about four such women who chose spirituality as their true calling and walked on their sacred journeys defying social pressure and definitions.
In the book, Subramaniam talks at some length to four spiritual practitioners– Sri Annapurani Amma, Balarishi Vishwashirasini, Lata Mani, and Maa Karpoori. Mythology is laden with male questor myths, but the female questors are more elusive. They often feature as piecemeal cameos, as the object of the search rather than its subject. Arundhathi Subramaniam in Women who wear only themselves It is interesting to note how Arundhathi’s interest in women mystics came to be. Circa 2003, when she was attending a Hermetic Writer’s Residency in Scotland, she read about Christian mystics. This piqued her interest in women-mystics. Much later, she discovered the Bhakti poets who have often made appearances in her writings since then.
Read the full review on Kitaab.
Email Post
Labels: 2021 Arundhathi Subramniam Book Review Non fiction Speaking Tiger