Kunti, a rare matriarch in the Mahabharata and one of the revered Pancha Satis, holds an unforgettable position in the Indian literary imagination. Yet, little is known about the fateful events that shaped her early life. Taking on the intricate task, Koral Dasgupta unravels the lesser-known strands of Kunti’s story: through a childhood of scholarly pursuits to unwanted motherhood at adolescence, a detached marriage, and her ambitious love for the king of the devas. After the remarkable success of Ahalya, the first book in the Sati series, Kunti presents a brilliant and tender retelling of a story at the heart of our culture and mythology.
In the Sati series, Koral Dasgupta explores the lives of the Pancha Kanyas from Indian mythology and reinvents them in the modern context with a feminist consciousness.

Koral Dasgupta is an author, painter, entrepreneur, and professor. A compulsive storyteller, she has authored six books, including five works of fiction and one non-fiction. The Sati series is based on Panch Kanya from Indian mythology. After Ahalya, Kunti is the second book in the series, which will be followed by Draupadi, Mandodari, and Tara. Koral’s fourth book has been optioned for screen adaptation. She is the founder of Tell Me Your Story, a cross-culture repository on the global perception of ‘India’.
Koral consults with educational and corporate organizations on content and communication projects, and she was included in the Holmes Report’s Innovator 25 Asia-Pacific list, 2019.
Her website is http://www.koraldasgupta.com and she is on Twitter as @koraldasgupta.

The second in the Sati series by Koral Dasgupta, Kunti is a refreshing take on a character that is often misinterpreted in the Mahabharata.
The book can be described perfectly when it is compared to its packaging. It is petite and powerful. Yes! Even the physical book looks petite and fits into your palm but is such an exceptionally strong read.
With a gorgeous cover and a strong blurb that encapsulates everything that is associated with Kunti, Dasgupta's book sets a tone for the reader. And she delivers on the same tone, matching word for word till the end.
Growing up reading Mahabharata, I had a lot of questions. As a woman, as an individual, and also as a reader- It is exciting to read the different retellings that are available right now for us to read and satiate our curiosity. Starting with Chitra Divakaruni Banerjee's The Palace of Illusions and Sita to Koral Dasgupta's Sati series, each is a brilliant retelling that captures the untold and unspoken side of women characters from mythology.
These books are important. They are conversation starters and much-needed eye-openers, especially in our patriarchal society where we are used to gauging women with one dimension only. 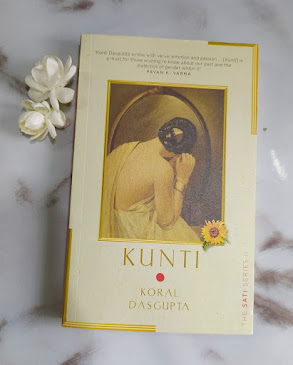 Dasgupta adds a feminist edge to Kunti's story as she portrays her as an independent, self-assured, smart, and intelligent woman. Dasgupta's Kunti is someone you can not only relate to but also be inspired by. She is a learned woman, a scholar who is smart and knowledgeable. She is ambitious. She is bold and at the same time, kind. At the core of it all, she is a woman who knows what she wants and works hard to achieve that. Be it the love of the person she is in love with or a young girl dreaming of a bright future full of possibilities.
I admired the way Koral Dasgupta traces Kunti as an individual first, moving on to charting her journey as a daughter, sister, wife, and then eventually as a mother. It speaks volumes about how motherhood, which is often associated as the ultimate goal for any woman need not be so. A woman is a woman before everything else. Her desires, her dreams, her likes, and her dislikes are important and need to be respected as they are.
While we might have seen Kunti as a cruel mother, but Dasgupta explains how long before she became a mother, she was a confused teenager. An adolescent who was unprepared for motherhood and perhaps was working on her own challenges.
The whole book is written in the first person and the language is beautiful. Simple, lucid, and yet thought-provoking. Koral Dasgupta can make you think through her simplest of perspectives and it is a treat to read her work.

"With his parting advice during the last visit, Vasudev assured me, 'Never believe what you seek isn't worth seeking. Because it's your faith if not his will, that will bring him to you as a captive to your needs.'

'What do you know about this 'him'?' I had asked, and Vasudev laughed.

'Nothing, just a personification of your goals, maybe. The merit that you consider an equal.'

Backed with immense research, Kunti comes across as an engaging read. In a world of instant meals, I would say this is like a five-course meal which needs to be relished bite after bite, slowly, savouring the flavours and fragrances all alike.

Overall, a must-read in every aspect. Storytelling, narrative, description, and the characters - everything about this book is impeccable.