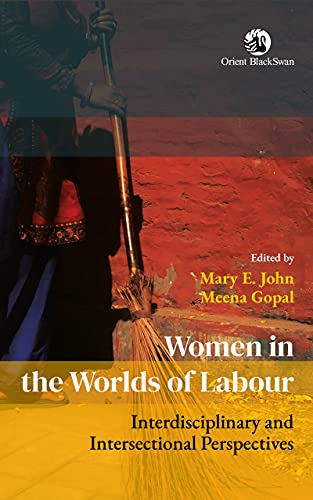 You can get your copy from

As I stared at this headline by The Print: Covid has devastated India’s self-employed women – I kept thinking about this book I had recently completed.
According to World Bank data released in June 2020, that year India’s female workforce participation fell to 20.3%. India has one of the world’s lowest participation rates for women.
This book features 20 essays by women scholars and researchers who share their thoughts and observations about how India is failing its labouring women. We are staring at a huge crisis waiting to explore and it is high time we act on it.

Two professors, Mary E John (Centre for Women’s Development Studies, New Delhi) and Meena Gopal (Centre for Women’s Studies, TISS, Mumbai) have edited these essays and also written a comprehensive introduction giving us a background about the issues highlighted in these essays. The range of these essays is immense.
From LGBTQ+ representation (or the lack of!) to disability quota. From sex workers to domestic workers. From women teachers to artists, from factory workers to women in anganwadis – this collection tries to talk about this increasing gap from various perspectives. Their research and findings emphasize how this discrimination is not the case with just one industry or one area/city. It is so deeply rooted in the system that to change it, is going to be a huge challenge. But, one has to begin somewhere.
As one of the essays talked about how a working woman always has two jobs – one at home and one at the office – it struck deep within as I thought of my mother who was a working woman and then years later about my own plight as I juggled between home and office – the challenges never seem to end. Interacting with other women from different socio-economic backgrounds, helped me understand how the challenges of women remain the same at the core – as balancing home with work was the biggest challenge for a woman irrespective of whether she was a CEO of an MNC or a domestic worker. The gravity of the problems and the main area of conflict might vary, and what also varies in the level of financial independence enjoyed by these women.

As someone who worked in the Financial Services sector for more than a decade, a lot of questions I raised during my tenure but never got answers to were discussed in these essays. From not having a separate washroom for women employees, to having no grievance redressal for any harassment complaints, the lapses by some big corporate banks were an eye-opener for me. The essay by Geeta Thatra on Mujra and Baithak in Bombay (now Mumbai): Courtesan’s Affective showcases the origin of the culture of nautch girls and prostitutes brilliantly.

Caste-Hindu nationalists, social reformers, and the middle classes of the period displaying a conservative sexual politics, that was yet ‘tolerant’, selectively appropriated the values of modernity, civilization, cleanliness, and purity in order to socially condemn the courtesan and her legacy of medieval Muslim rule: the ‘prostitute’ woman was considered a necessary evil but had to be shown her ‘proper place’ and geographical limits. (Pg 137-138)

The words ‘…had to be shown her proper place..’ gave me goosebumps. These words continue to exist to date and men still try to use these words to refer to a woman who (according to them) shows tantrums and does not give in to their demands/ requests /pleas.
*-*-*
Eventually, I quit my job due to health reasons. The company’s firm disregard towards my personal issues ( majorly health-related) for over a year caused immense damage to my health. In 2014, I was diagnosed with a life-altering auto-immune disorder because of which I cannot return to the workforce as I am not disabled. Strangely enough, the corporate culture continues to be impertinent even to the disabled. As I discovered much later, not only through my personal experiences but also after reading the essay, Engendering the Disability – Work Interface by Renu Addlakha.

It was interesting to note the extent of discrimination that is rampant in our workforce. It would not be wrong to say, I had to quit my job due to my disability. Neither would it be wrong to say, that after that, I have never been able to secure a full-time job for myself.

Disability cuts across class, gender, nationality, and generation because it can happen to anyone at any time. Loss of employment is one of the most common and severe consequences after the onset of disability. (Pg. 245)

For the last few years, I have been working closely with some NGOs who are working on bringing this issue to the forefront. Though the progress might be slow, it is good to see things moving in the right direction. The recent pandemic was the perfect revelation for many. For a world that refused to move beyond cities or did not want to consider the option of Working From Home for certain specific roles, it all changed in the blink of an eye when the COVID-19 pandemic hit the world.
All of a sudden, everything from school to birthday parties, from editors to CEOs – all could happen virtually and the world continued to go on as usual without any hiccups. In a way, for people like me, Zoom was a boon. All the lit-fests, sessions, seminars, and discussions I could not attend before 2020 due to my health restrictions were all now available at the click of a button.
In 2021, as soon as normalcy started showing up, the usual rigidness of roles and demands of the job position started creeping back in.
*-*-*
An interview with Svati Shah, the author of Street Corner Secrets had so many insights about sex work, sex for work, and the spaces in between. While Sandali Thakur’s essay on Women’s Art was penetrating how women artists are exploited in the name of labour.

This book is the need of the hour as it raises so many important questions and draws to our attention the wrong practices we have been carrying on for years now. A highly recommended read, this book is like a cup of coffee. Hot, sizzling and hits differently with every sip for you do not know which thought is going to be triggered next. It is 2021, and it's high time we talk about equality, inclusivity, and diversity in one breathe before ensuring it reflects in every aspect of our workforce.
I would like to end it with these words from the introduction written by both the editors,

“This volume of essays should be taken as one kind of response from amongst feminist activists and writers to what can no longer simply be called the problem of women’s labour, but one that has assumed the proportions of a crisis.” (Pg xx.)