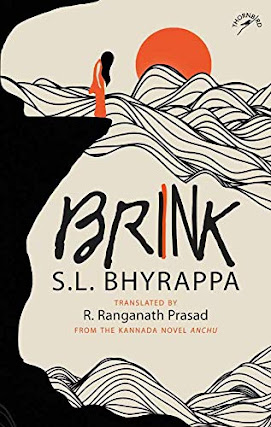 Namrata reviews S.L. Bhyrappa’s Brink (Translated by R. Ranganath Prasad and published by Niyogi Books, 2020) calling it a much-needed reminder in today’s times when mental health is still spoken about in a hush-hush manner.
Translated by R. Ranganath Prasad from a popular Kannada novel ‘Anchu‘ originally written by S.L. Bhyrappa, Brink is a story that touches a raw nerve with the reader in various ways. It talks about mental health and relationships with a rare poignancy all throughout its narrative.
Considered to be one of the foremost writers in Kannada literature, Bhyrappa has been honoured with many awards including the Sahitya Akademi Award for Daatu in 1975 and Saraswati Samman of K.K. Birla Foundation for Mandra in 2010. His novels have been translated into almost all Indian languages. Previously R. Ranganath Prasad worked for a public sector bank and later resigned from his job to pursue his interest in literature and translations. Initiated to metrical versification, he has penned about a thousand verses and participates in the performing literary art called Avadhanam. As a Kannada novelist, S.L. Bhyrappa’s works have always been considered unique in terms of their themes and storylines. Brink being no different in that case with its storyline predominantly being about two people – Somashekhar and Dr. Amrita. Somashekhar is a widower while Dr. Amrita is estranged. These two lonely souls are thrown together under various circumstances and develop a close bond with each other.
Read the full review on Kitaab.
Email Post
Labels: 2021 Book reviews Indian Writing Niyogi Books translated work