The Speaking Stone by Ratnadip Acharya 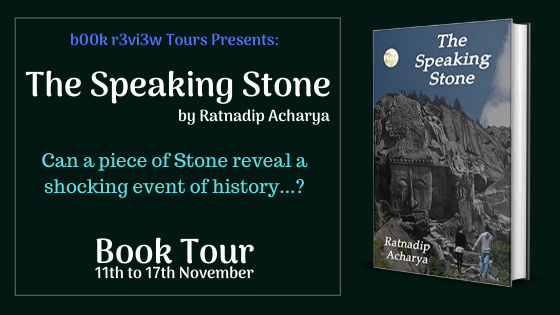 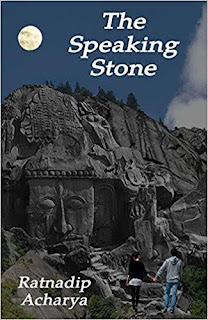 Mumbai, December 2016:
A young man found an ancient-looking piece of stone with strange images and Sanskrit inscriptions. A quest to know the origin of the stone brought him to the distant part of the country.

Chandannagar, December 2016:
A young vivacious historian woman read an old book on a century-old secret story about a little known part of the country. Her curiosity got the better of her as the book disappeared mysteriously before she could complete it. She reached a sleepy quaint state of the country to satiate her curiosity.

Eventually they both met and their search began from the city museum to a far-flung rock mountain which revealed a century-old story of a seductive danseuse, her enigmatic lover, a string of her admirers, a painter with a photographic memory, a bird that could speak in many voices, a benevolent king and a gruesome conspiracy. And the most important clue to decode the final secret was with the missing part of The Speaking Stone. But in the process of unearthing old secrets their lives were also in danger…

“Sir, we are about to close,” a courteous but curt voice materialized from near his shoulder. These words, however, had barely any effect on him as he just groaned sleepily, without budging even an inch.

The middle-aged man standing behind him hesitated for a moment before placing his fingers on his shoulder and tapping on it.

“Sir, it is well past one-thirty. We must close now at any cost. You know those Colaba police, na?” the man in uniform urged him. After all, he could not afford to speak in an authoritative manner with someone who frequented their pub, always drank enough to make the pub owner richer by a few thousand, behaved well with all the butlers unlike many other young men his age, and, above all, was always generous to give tips to the workers in the pub. He was quite a favourite with the staff of this famous pub, Voodoo, a little behind Hotel Taj Palace in Colaba. They looked up to him for another reason, too. It was his demonic capacity to drink and remain composed and collected even after that. Never before had it happened that he placed his head on the table, pillowed on his locked arms and slept blissfully. Whenever he visited Voodoo on weekends he was accompanied by one or two friends and the attendants in Voodoo knew that one of those friends, who didn’t drink, was always at the wheel while they returned from the pub. But tonight he was all alone and completely drunk. They were not sure as to how he would ride home.

“Sir,” the uniformed man called him again, tapping on his shoulder, a bit impatiently now. This time as he leaned to touch the young man's shoulder the hanging end of his tie touched his ear and earlobe. What the earnest request and tapping of the attendant couldn’t do, the hanging end of the tie seemed to have done it effortlessly. Probably it sent a tickling sensation down his spine as he raised his head with a sleepy smile.

“Sir, we are well past our closing time,” repeated the man. He passed a searching glance about and as he found the pub empty except for him a sheepish smile came over his lips.

“I am sorry,” said he, trying to get to his feet. A pleasant sweet smell of Black Label whisky issued from his mouth.

“May I use the toilet once before leaving?” he asked with his usual politeness and then headed to the Men’s with an unsteady gait.

He returned from the toilet after a few minutes, wiping his face with a handkerchief.

“Are you sure, sir, you can manage to go all by yourself?” asked the concerned attendant.

“I will,” replied he and staggered to the entrance of Voodoo.

The attendant watched his six-foot-tall frame leaving the pub and hoped he would reach home safely. He consulted the watch. It was a quarter to two.

Outside the pub the young man stood for a few moments, trying to gather his thoughts. He looked around then. The street in front of him was deserted. At the corner of the street, two stray dogs were sleeping, coiling themselves against each other to feel warm in the cold winter night. A thin wisp of smoke was spiralling up from a small heap of ashes. He knew the durwans from the nearby buildings might have lit the fire with the foliage and old discarded cardboard to warm themselves up. He did a mental calculation and tottered ahead at a slow pace. All that accompanied him was his hesitant footfall and a faithful shadow. He walked past Kashmir Emporium, Rustic Rajasthan, and an antique shop whose targeted customers were usually foreign tourists, and arrived behind the Taj Continental where scores of four-wheelers were parked. As he looked at the cars, parked in an astonishingly disciplined fashion to make the most of the space, a thought struck him. Most of the cars were white. He had no difficulty in finding his car. He opened the rear door of the car and plopped himself down on the seat. It was not long before he stretched at full length, occupying the entire back seat.

Soon he fell asleep when the crashing waves of the Arabian Sea, in front of Hotel Taj Continental, played a lullaby for him. It was the first night he slept in the car. 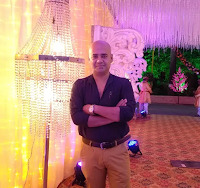 Ratnadip Acharya is the author of two successful novels, Life is Always Aimless... Unless you love it and Paradise Lost & Regained. He is a columnist for the Speaking Tree in The Times of India. He contributed many write-ups in different collections of Chicken Soup for the Soul. He lives in Mumbai with his wife, Sophia and son, Akash.