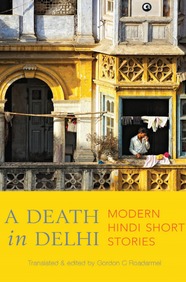 The Hindi short story is one of the most exciting genres in modern Indian literature. The fifteen stories in this volume, by some of the most prominent writers in the field, provide a unique picture of the country today.

Most of the stories focus on urban middle-class individuals and especially those whose lives are marked by alienation and loneliness. They highlight the disruptions caused in a society that is modernizing at a rapid pace while still being blessed and burdened by a strong sense of traditional morality, duty and family ties. Among the writers included in this volume are Kamleshwar, Nirmal Verma, Phanishwarnath 'Renu, Krishna Baldev Vaid and Mohan Rakesh.


The late Gordon C. Roadarmel, whose earlier translations from Hindi include The Gift of a Cow by Premchand and To Each His Stranger by Agyeya, taught Hindi language and literature at the University of California, Berkeley.

Since the time I can remember as a reader, Aleph books has been known for its excellent anthologies or short story collections on Indian writing. And this one is no different. From Clutch of Indian Masterpieces to Urdu Short stories, they have always tried to pick the best and present it for literature lovers.  Each of the titles has been a gem, a collector's pride and a book lover's delight to have it on their shelves! At a time when Indian writing in regional languages was feared to be lost, their attempt to revive the classics is something that worth applauding.

With a cover that captures the precise feel of Old Delhi in it, this book captures the essence of the capital city from the word go. This picture alone, speaks a thousand words and has so many stories hidden in that one glance you give it.

Delhi has been a city of important since time immemorial. Historically, it was an important throne everyone fought for and in current times, it is the hot seat of politics owing to being the country capital. There is a sense of royalty in its air, the moment you step in you realise you are not in any ordinary city. It is regal in everything. Especially the Old Delhi, which is full of secrets and mysteries. With its dingy lanes and narrow houses, this area also has a lot of cultural importance. Some of the oldest landmarks exist here, and the best of Delhi's food hawkers are known to have originated from here. Though largely known for its local delicacies and markets, it offers you the best of Delhi along with an unforgettable experience.

Having spent a large part of my childhood in this city, there is a special connect I feel towards it. For me, this city will always mean my second home (Mumbai being the first). I read this collection with a lot of expectations and was not at all disappointed. These stories, originally written in Hindi, managed to make me nostalgic and left me craving for a trip to Delhi soon.

This anthology is an eclectic mix of some of the best names in Hindi literature. Starting from Phanishwarnath 'Renu', Kamleshwar to Awadh Narain Singh and Dudhnath Singh.  But what is more interesting is, the choice of the stories. Now as we always feel, some stories carry an old feel with them. Though they are beautiful, poignant and exceptionally well written, there is some old world charm hidden in them which make them stand out. These stories, though written many years ago, have that old world charm and yet are equally relevant in today's times.

Exploring modern themes like alienation, loneliness and existentialism, these stories make for an engaging read. They entice a reader and take you down the memory lane, when perhaps, lives would have been simpler, the battle for existence still remained the same. Comparing them with today's times and challenges would be unfair. For that would be mean, we are missing out of their sheer beauty and simplicity.

Written in lucid language with intricate detailing makes this collection a brilliant one. Roadermel makes 'the good old days' come alive in these stories, introducing us to characters which look like distant cousins we can relate to quite an extent and yet feel alien towards. It wouldn't be wrong to call this an allegory of history.

The issues for livelihood and survival are a common thread in most of the classic literary pieces while dissecting the social and political parameters one is surrounded with. Each short story is powerful enough to leave a reader mesmerized. It would be unfair to pick one favourite from this gem of a collection. Every story takes you on a high and continues to keep you afloat by weaving magic one after another, that long after finishing them you are still reeling under its impact. Short story writing is an art, where you have so much to say in such few words. All of these writers are masters at this art. Their stories have the power to make you laugh and cry with the characters. Their struggles seem so real that you are bound to be moved. Life is lying threadbare before a reader, in those stories.

Over all, an exceptional collection, highly recommended to all Indian writing lovers.