“The Missing Fairy Princess” is the story of a 16-year-old fairy princess pitted against a powerful witch. The witch has stolen a potent new mantra developed by a colleague, ruthlessly snuffing out a brilliantly innovative mind.  She then hatches an elaborate plot to frame an adversary for her misdeed.  Her intention is to exact sweet revenge from her foe and at the same time, get away with the theft.  The victim, caught in her vicious web, is doomed to disgrace and a life sentence on a harsh penal colony. Meanwhile, the witch learns from her crystal ball, about an imminent threat from a fairy princess wearing a pink tiara.  To ward off that threat she kidnaps the fairy princess, wipes her memory clean and then turns her into a two-year-old girl.

Unfortunately for the culprit, she has goofed up by kidnapping the wrong fairy princess, Merlyn, instead of Ashlyn, her twin.  The mistake turns out to be the undoing of the witch because Ashlyn proves to be her nemesis.  The brilliant fairy princess exposes the cobweb of misleading evidence fabricated by the witch, ultimately unmasking her.

If you love mystery, whodunit, with a dash of magical realism and sci-fi, this book is for you. 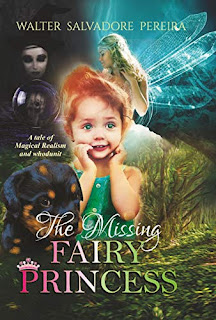 
Hi, I am Walter Salvadore Pereira.

I read “Uncle Tom’s Cabin” by Harriet Beecher Stowe in early teens and discovered for the first time that the written words stirred up emotions within you as much as the actual events one witnessed occurring around.  That book was followed by “The Count of Monte Cristo” by Alexandre Dumas.  Those two books of entirely different genres had a profound impact on me and set on my journey as an avid book lover.  At the same time, they did ignite an urge within me to emulate their authors.  But then family responsibilities were thrust upon me and the author faded into the background.

More than six decades later, leading a quiet retired life, the passion for writing came to the fore.  My first attempt at writing was a historical fiction, inspired by the Indian classics Ramayan and Mahabharat.  It was an epic comprising of over 100,000 words.  During the writing process, I went through every conceivable phase the author undergoes; writer’s block, frustration, despair, uncertainty.  I even reached the stage where I thought about abandoning the project altogether.  But the thought of the slog over those countless hours wouldn’t let me accept defeat and I persisted through tenacity and sheer will power.  I read it over and over, and again; chopped out entire sections and re-wrote until the outcome was to my satisfaction.  It took me over six years to complete that book, titled “Bheem – The Saga of Madhavpur” and finally, it was published during February this year on KDP Select.


In between, I published a fast-paced adventure sci-fi story titled “This Nightmare is for Real”.

I had been toying with the idea of a fairy tale for the last few years on account of it being the favourite topic of my granddaughter during her younger days.  The result is the current book, “The Missing Fairy Princess”.

I have made a foray in a totally different genre altogether for my next one – the cross-border terrorism faced by India – titled “The Carnivore has a Heart”.  It will be published through KDP Select within the next few days.

After spending over 25 years in the Middle East, the author, aged 75, now leads a retired life.  He lives with his wife and son in Thane, near Mumbai. He has been passionate about writing from his early days.  His first book was a fast-paced sci-fi novel titled “This Nightmare is for Real”, was self-published. That was followed by a historical fiction titled “Bheem – The Sage of Madhavpur”, again a self-publication.  A third book, a fairy tale titled “The Missing Fairy Princess” which was published on Kindle Select during the first week of June 2019, while a fourth on the oft-discussed topic of cross-border terrorism titled “The Carnivore has a Heart” is slated for publication shortly thereafter again on Kindle Select.