Cover Reveal: A Secret Tie -The King and the Spy by Summerita Rhayne 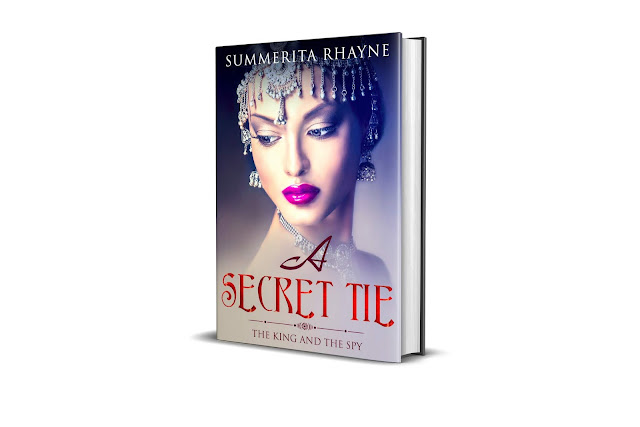 Yashita has chosen to lead the life of a spy. But after years of serving the ruler well, she has now a request. She wants to get married and settle down. To her utmost relief, King Hitaksha agrees to set her free. But he has a condition. She must fulfil one more mission before he will allow her to leave his service.

Through the dangers of ancient politics and twisted monarchy, Yashita faces threats and perils to the mission. Battling through unknown kingdoms, she must play a dangerous game to save her life and the King's. But there's far tougher trial she must live through constantly. The forbidden attraction the King holds for her...

A Secret Tie is the third book in a historical fiction series. Also read Against The Tide and A Twist of Fate.

Preorder for 99 cents only on Amazon

Summerita Rhayne writes contemporary and historical romance with lots of emotional conflict. She first got published in 2013 and has won contests with prestigious publishers such as Harlequin and Harper Collins India. She believes if the inspiration is strong enough, the story characters will find a way to make the writer pen them down, even when writing time is in short supply. When cerebrally confronted with the sizzling interaction of two Alpha characters, the only way to get peace is write their book!

She loves being a professor but becomes a homemaker when not at work. Winding down with a book and a cup of coffee is her favorite or you can find her watching legal drama series. (Suits, anyone?)She believes in being supportive to aspiring authors. You can connect with her if you have a new book out for a spotlight or a chitchat at her blog. Links are given below.

‘Do take the other bed.' She curled the hand which itched to reach out and touch him.

'Thank you for the offer. But I'm better placed here. I prefer the security of a locked door far more than a pair of nubile arms around my neck.'

The remark threw her. Unnecessarily provoking, in her opinion.

'And are those arms so eager to greet you, sire?' Would he punish her impudence?

'Now don't withdraw the invitation. I don't wish to arouse pique in you, but I have stated my preference.'

Again, she felt that stab of burning anger that it seemed only he could rouse. She suppressed the emotion and said archly, 'You're hardly complimentary. Some women might take that statement as a challenge.'

She sent him a provocative look from beneath her lashes, a slanting, coy look that had sent admirers prostrating at her feet. 'But you do not? Do you indeed not find me attractive, sire?’

Her pulse jumped at her own daring. A question which demanded a response.

His mouth twisted in a familiar wry look. He met her gaze full on. 'One does not take poison twice.'

She recoiled as though stung and he leaned forward and flicked a finger against her cheek, his tone lightened to a teasing note. 'One may take it in small doses, so as to get accustomed maybe.'

'Poison! Is that what I am to you?' Her chagrined question came in a raised voice.

His voice was even, but a different note entered it, sending shivers feathering down her spine for reasons she could ill understand. 'Is passion so different from poison? When it can dull your senses, make you lose your grip on reality, damage you...'

'You surely won't charm a woman if you keep talking like that, sire,' she said lightly, keeping the conversation from straying into dangerous zones. Yes, they were there...lurking beneath the surface. One unwise word and she might betray more than she meant to. She'd been wrong to give in to the impulse to challenge him. She knew as well as he there would be no going back for them.