Skip to main content
Labels
Posted by Privy Trifles May 28, 2019

'Mihir has followed Indian cricket since his school days in Mumbai and the nine waves in his own style will bring out the subtleties and the nuances, pulls and pressures, the culture and colour, the politics and the people that make Indian cricket different from other countries’.’ —Sunil Gavaskar

‘The nine waves will captivate all.’ —Ravi Shastri

‘Mihir Bose is fantastically well informed on world cricket and has great insight into the game.’ —Moeen Ali

'The nine waves is a tour de force. The most entertaining and comprehensive book on cricket in this country to be published yet, it tells the story of the nine great waves that have rolled through the history of Indian cricket, from India’s international debut in 1932 to the incredible achievements of Virat Kohli’s team today. Each wave or era was chock-full of mesmerizing stars, thrilling moments, great victories, heart-breaking losses and significant turning points—this book tells the story of each of them in great detail. The first wave of Indian cricket rolled in against the background of momentous changes in the country and the world: Gandhi’s Civil disobedience campaign, world War II and India becoming independent. Through each of the successive waves, India strengthened its position in the Cricketing firmament.


Towards the end of the twentieth century, it became the most powerful nation in world cricket—the prowess of the National team today matches the economic strength of the Cricketing establishment. As a five-year-old, the author saw Vijay Hazare, India’s first test-winning Captain, play. Since then he has been witness to some of the most dramatic moments of Indian cricket: India’s first win in England in 1971, Kapil Dev lifting the world Cup in 1983 at Lord’s, Tendulkar’s first test century at old trafford in 1990, Sunil Gavaskar scoring his 30th test century, the 2011 World Cup in India where M. S. Dhoni emulated Kapil Dev, Virat Kohli in 2018 in England proving he is the best batsman in the world today and much much more. He brings to the book his first-hand experience of some of the most seminal moments in Indian cricket, his Encyclopaedic knowledge of the game and his unrivalled ability as a chronicler of the sport to create a magisterial history of Indian cricket. Once dismissed by the English as the dull dogs of cricket, India is now eagerly courted by all Cricketing nations. On the field its cricketers are displaying skills which make India a worldbeater. Over a billion Indians, the greatest fan base in the world, treat their cricketers as demigods. The nine waves is a fitting testimonial to the game’s only superpower.

Growing up in India, you cannot help following cricket closely. I simply cannot forget the semifinal match on the 2011 World Cup series which I had watched in Inox. Ah! The energy and the enthusiasm was so infectious that it was difficult to stay glued to your seat every time an Indian batsman hit a four or a six. And the victory dance we did towards the end, was truly a sight to watch. If there is something we bond on forgetting all the differences then it is movies and cricket.

I have read Eleven Gods and a Billion Indians by Boria Majumdar and loved it. Every page was sheer joy - the excitement of those matches, the nail biting moments and the glimpses of their personal lives. One of my favourites when it comes to books on sports and cricket. As a cricket lover, the book, The Nine Waves, comes close to recreating the magic of cricket yet again. I began reading it just before the World Cup madness started and after completing it, there is a strange energy that engulfed me. It was a heady mix of excitement, joy, thrill and of course feeling of being victorious.

The book has been aptly called The Nine Waves as the author has divided the phases of growth of cricket in nine waves or era. Starting from India's international debut in 1932 to the recent achievements of the team under the captain Virat Kohli this book has it all. Bringing together his experience as a journalist and a broadcaster, author Mihir Bose creates a perfect ode to the sport we all have loved and lived and will continue to do. This is one love that will surely be passed from one generation to another, the favourites might change but the madness for the sport remains intact.

Capturing that madness in his words, author Mihir Bose creates an exciting book for any cricket lover. Tracing the journey of cricket, he shares with us interesting information about its history, how we were perceived as the underdogs and how over the period of time this perception has changed. So much so that today we are considered an extremely strong team and a worthy opponent every one wants to claim victory over. This make over did not happen over night. It took years of hard work, expert guidance by various renowned coaches and ofcourse not to mention the dedication of all our cricketers. It was a combined effort of all of these things that helped us win the World Cup twice till date and hope to win it again.

The book has been written in details, where minute aspects of cricket have been discussed at length. For me, it was akin to reliving some moments I had witnessed on television previously and the joy it gave me was unmatched. Backed with data, the author also shares his observations and predicaments about the cricketers and the sport over all. Some important milestones have also been brought alive with relevant images which have been immortalized in our memory for every now.

I thoroughly enjoyed how he traced the back story of some of our cricketing heroes who went onto create history for our country across the globe. Their stories are truly inspirational and you don't need to be a sportsperson to feel motivated by their struggles. However there is one thing common I have noticed across all sportsperson's stories across the sports played in India. It is the lack of proper infrastructure to back them and help them prepare for global events where they compete with other sportsperson from some of the most developed countries who had the privilege of getting the most advanced training possible. And yet when they win, such moments surely give you goosebumps. You cannot help but think, if they could achieve this with such poor training imagine what they could have done with proper equipment and training.

Nevertheless, these stories of triump against all odds are a huge motivating factor not only for aspiring sportsperson but also for people like us for in a way we are all in a race and we need to keep running till the very end.

Overall, a brilliant book on cricketing history of India. One that is strongly recommended to every cricket lover! 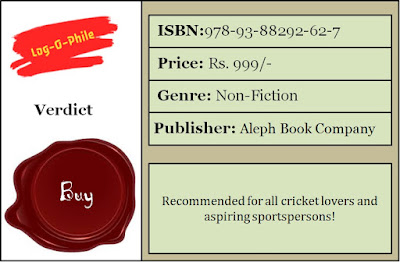