At lunchtime on 27 April 1959, the handsome naval commander Kawas Nanavati was told by his English wife Sylvia that she was having an affair with their flamboyant businessman-playboy friend, Prem Ahuja. Later that evening, armed with a revolver, Nanavati stormed Ahuja’s bedroom and shut the door behind him. Three gunshots were heard going off inside. Ahuja was dead.

Ahuja’s murder set in motion an extraordinary public frenzy – thousands descended on the streets of Bombay chanting in favour of the hero Nanavati and the jury, swept off their feet by the dazzling naval officer in the dock, returned a ‘Not Guilty’ verdict. This trial was the death knell of the jury system in India.

It hurtled a judiciary keen on preserving justice into confrontation with an executive bending to the will of hysterical crowds and tabloids and Nanavati’s powerful friends in the establishment. In this laboriously researched book – part thriller, part courtroom drama and legal history and part social portrait of post Independence Bombay – Bachi Karkaria gives a most comprehensive account of the Nanavati case and the Constitutional crisis to which it gave birth.

After watching Rustom, every one I knew about was talking about this dashing Naval officer and the murder committed by him which wasn't exactly a murder! For many it was about a woman whose husband had killed her lover. For me, it was about a man who decided to stand by his wife despite having every reason not to. After the case, he held her hand and walked away from all the noise towards a fresh start and lead a life of quietude with the woman he loved till his last breath. That for me, was beyond brilliance!

Having admired Bachi Karkara's work as a journalist, I felt it would be interesting to read her take on this sensational case and see if there was any truth in all that was being presented to us.It turns out Bollywood has harbored a penchant for this particular since time immemorial and has tried capturing its mystery in three different attempts including the latest one. Well, one cannot blame them. Infidelity and deceit has always got audience. Add a bit of murder and mystery to it and you have a perfect potboiler on hand!

And much to my delight, she has done a stellar job with this book. She has stayed true to the story while peeling layers one after another for a reader to witness the truth as closely as possible.

Before I talk about the book I would like to confess something. I expected the book to a bit partial owing to the fact that the author herself is a Parsi. I almost felt the reason she was compelled to write this book at this time was because she felt she had to clear the air surrounding the Parsis and their lifestyle because of this particular case. But believe me, I was in a for a huge surprise.

For starters, the overall tone in the book is extremely neutral. On the contrary she has analysed each and every angle so meticulously that you are bound to think, all three of them were right in their actions by the end of the book. It is also because somewhere towards the middle of the book, you begin to connect with the characters to an extent that any or every information is processed at a micro-level in your mind, analysed and re-analysed for hours before concluding something.

Though I have never been a fan of adaptations, I firmly believe it would be unfair to call this book an adaptation of the movie Rustom. You can read this interesting article on 5 facts Rustom got wrong to know more about this. The movie carried one aspect of the case, highly altered to suit the taste of Bollywood audiences. While this book is a journalistic piece, where she not only investigates everything for a reader, dissecting all the findings but also puts together a totally new picture before a reader of various minute aspects of the case. She brings forth points conveniently ignored in the movie, mostly because they were not 'eye balls grabbing' exactly. 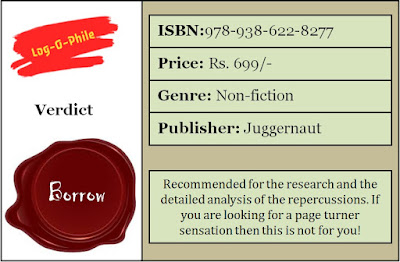 Taking into consideration cultural sensitivity of those times, along with the plethora of versions of gossips doing around and the high profile of the people involved in the case - the author has managed to do a stellar job in bringing it all together in such a gripping fashion. She talks about the changes in the judicial system after this case and shows us how the who's who of Mumbai fought tooth and nail to make sure their man Nanavati was able to walk away with his head held high. My most favourite part of the book has to be the way she dissects the legal proceedings, technicalities and the finer details of the legal arguments.  One can always argue about the information overdose in the book!

I would not call the book as gripping as the movie because of only one reason - It wasn't meant to be a Whoddunit or Right V/s Wrong. The book was clearly on the repercussions of the case, the aftermath - on people involved, the judiciary system, the press and ofcourse of the other parties who were a part of this case. I would rather call it more detailed, more subjective and more conflicting than the movie. Most importantly, in today's times with the advent of social media we feel journalists and new TV anchors are busy sensationalizing things for us but if you read this book you will come to know it was pretty much the same even then. The only difference was instead of social media, they had print media to play around with.

Backed with immense research and impeccable findings, this book is a must read for all history lovers and mystery aficionados. I would also like to add here, aspiring journalists or journalism students this book is a superb way of presenting the bare facts of a case without sounding biased or favouring one over the other.