The famous dancer Madhavi is at the court of the Chera king for a grand performance. The king's first son, Shenguttuvan - the crown prince of the Cheras - is getting ready for his engagement to a Velir princess. There is celebration in the air.


But when an astrologer predicts that the second son Uthiyan is destined to be greater than his elder brother, the Chera court erupts in chaos. The courtiers begin to play the brothers against each other. Life becomes dangerous for Uthiyan and the prince is forced to flee his home in the garb of a monk.


On the perilous journey rife with assassins and conspirators, he is joined by others who seek refuge at the just court of the Pandya king. But darkness is descending on the ancient city of Madurai. Warriors from the west, the single-minded and ruthless Kalabhras, have set out to conquer the prosperous Pandya capital and change the face of Tamilaham. Tormented by rage and lust, beset by betrayal and terror, Uthiyan is forced to choose a side in a conflict that is certain to end in bloody violence.

'Meticulously researched, visually evocative and impeccably written - all the while packing one hell of a page-turning punch' - Krishna Udayasankar 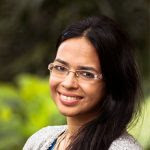 When she was eight, Samhita Arni started writing and illustrating her first book. The Mahabharata - A Child's View went on to sell 50,000 copies worldwide. Her second book, Sita's Ramayana, a graphic novel, was on the New York Times bestseller list for graphic novels for two weeks. She is also the author of the novel The Missing Queen.

You can know more about her through her website.

The first thing that caught my attention about this book was it's blurb - I love retold epics! Stories about kings and queens, princes and princesses, royal palaces, kingdoms, wars, betrayals etc have such a grand feel to it. Second thing was the author's bio - selling 50,000 copies worldwide as an eight year old is no mean feat! I was mighty impressed and was really looking forward to this story of a Prince who had turned into a monk.

After having devoured the book, I can easily say it is difficult to choose the best thing about this book. I am totally in awe of the writer - she has left me spellbound after reading this book.From an evocative cover which is such a tease for a reader- The half face of a monk in ochre robes with his piercing glaze shooting right through the hardcover is something that is totally impossible to miss! To the brilliant story telling, this book is a gem.

Reading this book was a surreal experience. It would be wrong to call it a retelling. Though technically it does borrow heavily from the Tamil epic Silappadikaram, the author has added her own unique touch. She has managed to create extremely powerful imagery through her words, leaving the reader reeling under the impact of the story. The world building is intriguing and makes all of it come alive. Scene after scene you can visualize it all like some epic motion picture before your eyes. The language is lucid and at the same, conveys a lot in between the words too.

"The truth is this - we are all seekers, for the knowledge that makes us content with our lot, content with what we are, to make peace with the tragedies that befall all of us."

"We must respond to the new ways, we cannot keep with the traditions of the past merely because they come from the past. If we do so, we destroy ourselves."


Coming to the characters in the story, each one of them is well articulated. Most importantly, the author makes us believe in their individual versions, to an extent that you are left perplexed towards the climax in unveiling the whole plot. I loved Kannagi and Madhavi's characters so much, that by the end of the book I felt I was a part of their world and now was suddenly directionless knowing not where life will head now on. Each character is unique in their depiction and adds to the narrative bringing in fresh perspective to every scene they are included in.

Striding through three dynasties - that of Chola, Chera and the Pandya this book is replete with amazing music and dance information of those days. Backed with immense research, which shows in the highly detailed narrative, this book is a sure shot page turner.

Scene after scene the plot keeps getting intense as one layer after another are revealed poignantly by the author. The tension depicted amongst the characters is palpable in the narrative, which is beautifully balanced. Heavy and intricate in scenes which deal with serious topics while playful and fluid in scenes which are light and pondering in nature. The author deserves brownie points for this. She has handled the subtle nuances of relationships, mixed with liberal doses of emotions brilliantly.

Personally I would love to see this being made into either a movie or an online series, it would be sheer joy to watch it all come alive on screen and relive this experience!

Recommended, for people who love history, mythology and stories which talk about kings and queens.

This book is like Guava and Cheese Pastelitos- Tender, delectable and scrumptious in every bite!