Book Review: Myanmar in the World - Journeys through a Changing Burma by Abhijit Dutta 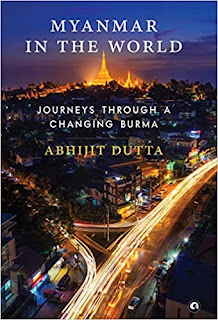 The first time Abhijit Dutta travelled to Burma, he had booked tickets on a whim, with hardly any thought as to why he was travelling there at the height of its hot summer. He landed in Yangon on 31 March 2012, the day before the by-elections that would make Aung San Suu Kyi a Member of Parliament, the first of a series of changes that few could have predicted. Her party, the National League for Democracy (NLD), was contesting elections after Suu Kyi had been under house arrest for fifteen years under various military regimes.

Burma officially the Republic of the Union of Myanmar has seen more change in the past six years than it has in the last sixty. From being a pariah state ruled by the military junta and clubbed with the likes of North Korea and Cuba, it became a favoured travel destination, an investment opportunity and the poster child of democratic transitions before turning, once again, into a pariah nation criticized by the world.

Even as tourists and investors started to arrive, new roads and bridges built and old laws modified, other troubles began to brew a stagnating peace process, an economy that was slowing and an international humanitarian crisis in Rakhine State that has focused intense global scrutiny on Suu Kyi and her leadership. A newly resurgent Burma will need to resolve these and other issues, small and big, before it is firmly on the road to peace and prosperity.

In Myanmar in the World, Dutta travels through the breadth of the country and the span of its history to give us a real, intimate picture of the many ways in which Burma has changed and yet remains the same.

Abhijit Dutta is a writer and editor based in Singapore. His words have been in the pages of Lonely Planet India, National Geographic Traveller India, Mint Lounge, The Hindu Weekend and the Indian Express, among others. He is a former editor of the Mint Lounge Travel pages.

While doing my travel writing course one thing that struck me with was, "Places are not made by food, buildings or monuments. Places are made by people. They define a place." This book, encapsulates that thought for me beautifully!

Taking us through the journey of Myanmar,the author shows us what lies beyond the beauty it is surrounded with. He shows us the fear thriving in people's hearts there, the religious divide, the issues they face in day to day lives along with the cracks in the huge structure called Myanmar. Press and media, as always have played a huge role in bringing the world closer and to quite an extent is creating a gap too. Sitting in New Zealand when you read about an accident in India, the version is extremely different than the one reported in an Indian newspaper and that for you is the media.

Here, for years we might have been made to believe in the peaceful life of co-existence in Myanmar where things are considered to be all hunky-dory here comes a book which attempts to answer the burning question of "What is Myanmar thinking?"

Backed with intensive research, this book is full of first hand information, collected over years of having lived there, travelled across the country extensively and having interacted with local people to understand their definition of life, in Myanmar.

Replete with interviews and conversations with people living there , author Abhijit Dutta paints a heartbreaking picture of the ground reality there. It is heartening to read why some Hindus in Myanmar do not want to be identified as Bengalis. Not to forget the thrilling trip to Yangon, which is filled with bitter memories. Punjabis, Gujaratis, Bengalis, South Indians - you cannot help find traits of familiarity sprinkled all across the demography of Myanmar and yet there is something so distinctly unrecognizable about it. It is like coming home after years and finding it to have changed beyond recognition. The passages narrating their ordeal is extremely poignant as it makes you feel the pain that gnaws them from within every single day. Tracing the journey of a country which was once known as Burma to how it came to be known as Myanmar is not easy, but the author has done a stupendous job at articulating the important milestones and displaying the changes that happened therein.

This book is a recommended read, for people who enjoy reading history or learning about new countries, their economy, culture and changing structures. It is an educative book that tells you a lot about a country and its journey through changing regimes, struggles to stay afloat despite all the economic roadblocks faced  and the attempt to stay deeply rooted in tradition and culture.

This book is like Pitla - deliciously simple with delectable flavours!