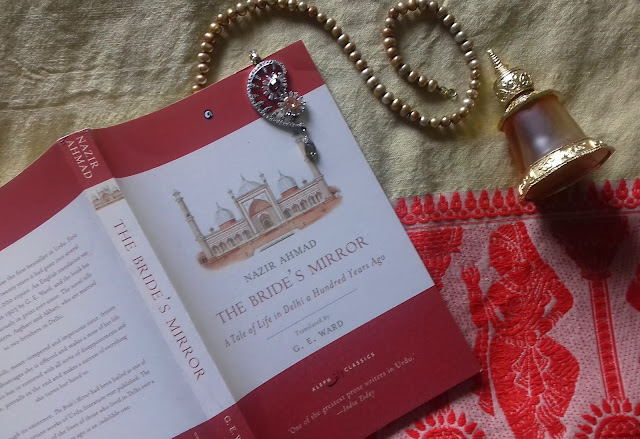 
‘One of the greatest prose writers in Urdu.’ - India Today

The bride’s mirror (mirat ul-‘arus) was the first bestseller in Urdu. First published in 1869, within twenty years it had gone into several editions and sold over 100, 000 copies. An English translation was published in England in 1903 by G. E. Ward and the book has been almost continuously in print ever since.

Deputy Nazir Ahmad Dehlvi, also known as "Diptee" (Deputy) Nazir Ahmad (1831–1912), was an Urdu writer and social reformer from British India. He is considered one of the first novel writers of Urdu.Nazir Ahmad (1831–1912) was a well-known Urdu writer and colonial administrator. Besides the fame he achieved as a writer and thinker in his lifetime, he was admired for his attempts at social and religious reform. Nazir ahmad died of a stroke in 1912. G. E. Ward was a civil servant in Bengal. When he retired he studied and taught Urdu at wadham college, oxford university.

I have fallen in love with Aleph Classics - what a beautiful range of classics, with soothing covers, alluring designs inside and beautiful font styles to match the whole theme of the book. If there is one word that could describe this beauty I am currently holding in my hand then it has to be 'Mashallah!'

This gem of a read was a perfect choice for someone like me who loves translated works of Indian writers. Hats off to Aleph Books for bringing such long forgotten gems to the foray by presenting them in a new style so that avid book lovers like me can quench their thirst. If like me, you have looked at Delhi like a long lost lover, dying to listen to the many stories hidden within its dusty lanes then this book is for you.

I have spent part of my childhood in Delhi and for me, it still is as mysterious as it could ever be. I know of places that are mostly unheard and not talked about, still I feel there is so much more to hear.  Reading about Delhi is always fun because no one single author can capture its mystic beauty and none are wrong in their depictions of it. Delhi is multi faceted.

I loved the depiction of women of the 19th century in the story. It was fascinating to read about their lives and struggles centuries ago in a country where women even today are struggling for some of the basic rights to existence.

Strongly recommended, don't miss reading this gem of a book to know the real beauty of our culture and the city we call our capital!

This book is like Indian Shakshuka- A wonderful dish which is not only a comfort food but also one that tickles your taste buds like another!