Skip to main content
Labels
Posted by Privy Trifles May 22, 2018 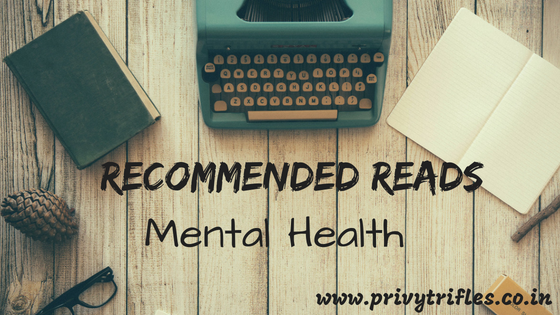 May is celebrated as the Mental Health Awareness month in India and what better way to celebrate it than to recommend books that talk about mental health is the most poignant manner. There has always been a certain stigma associated with mental health and such books are the need of the moment.

Winner of 'The Hindu' Literary Prize 2012, this book is set in Bombay during the last decades of the twentieth century. Em and The Big Hoom tells the compelling story of the Mendeses mother, father, daughter and son. Between Em, the beedi smoking, hyperactive mother, driven frequently to hospital by her mania and failed suicide attempts and the Big Hoom, the rock solid, dependable father, trying to hold things together as best he can, they are an extraordinary family.


Veronika Decides to Die' is a beautiful tale of hope and happiness. The story revolves around Veronika, a young Slovenian woman who has everything that a woman in the prime of her life would want. She has a good job, a string of boyfriends and a family that loves her. However, she is not happy with her life and decides to committ suicide. After taking sleeping pills, she awaits her death which does not arrive. She wakes up in a hospital where she is told that the pills have shortened her life span and that she has only a few days to live. Within the walls of a mental hospital, Veronika falls in love with a person suffering from schizophrenia. The head psychiatrist at the hospital is trying to perform an experiment, which concerns Veronika in some manner. How and why is this happening? That is what the story is about.


3. Turtles all the way down by John Green

It all begins with a fugitive billionaire and the promise of a cash reward. Turtles All the Way Down is about lifelong friendship, the intimacy of an unexpected reunion, Star Wars fan fiction and tuatara. But at its heart is Aza Holmes, a young woman navigating daily existence within the ever-tightening spiral of her own thoughts.In his long-awaited return, John Green shares Aza's story with shattering, unflinching clarity.

4. The Curious Incident of a dog in a night time by Mark Haddon

'The dog was lying on the grass in the middle of the lawn in front of Mrs Shears' house. It looked as if it was running on its side, the way dogs run when they think they are chasing a cat in a dream. But the dog was not running or asleep. The dog was dead. There was a garden fork sticking out of the dog.' The Curious Incident of the Dog in the Night-Time is a murder mystery novel like no other. The detective, and narrator, is Christopher Boone. Christopher is fifteen and has Asperger's, a form of autism. He knows a very great deal about maths and very little about human beings. He loves lists, patterns and the truth.

He hates the colours yellow and brown and being touched. He has never gone further than the end of the road on his own, but when he finds a neighbour's dog murdered he sets out on a terrifying journey which will turn his whole world upside down. Christopher is a brilliant creation, and Mark Haddon's depiction of his world is deeply moving, very funny and utterly convincing. The novel is being published simultaneously for adults by Jonathan Cape and for children by David Fickling, publisher of Philip Pullman. We are convinced that both audiences will recognise it as one of those very rare books that change the way you see everything.
5. The Perks of being a wall flower by Stephen Chbosky

The Perks of Being a Wallflower’ is an epistolary novel, where the narrator is a young introvert boy called Charlie. The story revolves around series of letters written by Charlie to an anonymous person mentioning his experiences. Though shy and sensitive in nature, Charlie is an intelligent boy with unconventional thinking capabilities. His first letters starts with Charlie mentioning about suicide of his Middle School’s friend and death of his favourite aunt Helen and how these tragic incidents have took toll in his life.

Charlie befriends two seniors Patrick and Sam and ends up indulging in alcohol and other drugs with Sam. In the meantime, Charlie also learns about his sister having relationship with an abusive guy and eventually getting pregnant. The flashback of his aunt dying in car crash stops haunting Charlie, as he starts enjoying company of his friends and Sam. While playing Truth and Dare, he is asked to kiss the prettiest girl in the room; he kisses Sam for which he faces neglect from the group.

Flashback returns. Will Charlie be ever able to get control over his life? Will he be able to get his friends back? What turns did Charlie’s life take and how he battled to overcome it? A story filled with drama and lots of emotions, including, friendship, first love and sexuality- The Perks of Being a Wallflower.

How many out of these have you read?