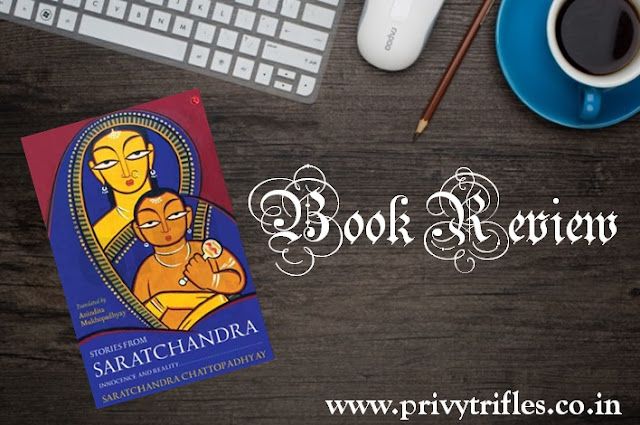 Some time ago, a sudden rumour spread across our region that unless three children were sacrificed, the railway bridge over Roopnarayan just could not be constructed. Two small boys had already been buried alive under one of the pillions and only one more needed to be caught...’ This book is a collection of twelve widely acclaimed short stories of Saratchandra Chattopadhyay, one of the doyens of Bengali literature. Divided into two sections, the first bunch of stories portray childhood in all its unburdened innocence while the latter section leads on to deeper sensibilities—the everyday experience of casteism, the lived reality of social hierarchy and the bonds of almost filial affection forged between man and animal that sustain both. Stories from Saratchandra shows Saratchandra’s keen eye as a social commentator, presenting a vivid picture of life in rural Bengal during the early twentieth century.

Saratchandra Chattopadhyay (1876–1938) was one of the most prolific novelists and short story writers from Bengal in the early twentieth century. Among his novels, his most notable works include Baikunther Will, Devdas and Srikanta; stories such as ‘Mejdidi’ and ‘Mohesh’ rank among the most loved. Saratchandra’s powerful portrayals of human, economic and social distress, colonialism, middle-class lives and the rural world are still widely read, translated and have been adapted into films.

Before I start the review of the book I would like to talk about its eye-catching cover. Though it is said “Never judge a book by its cover”, every avid reader I am sure agrees that beautiful covers are a weakness and a major role player in decision making while choosing a book. With a maroon backdrop and a lovely portrait of a mother and child on it which resembles a painting in indigo shades, this cover is a work of art.

Even the design inside the book is exceptionally well done. I particularly love those tiny kites used to denote the end of a chapter/story. I really love such minute details which are paid attention to, as for me they add to the whole experience of reading a book. Coming to the book, Saratchandra Chattopadhyay is one of the prominent Bengali authors whose stories I have grown up reading. I have always admired the sense of rebelling prevalent in his stories.

If like me you enjoy reading translated works, you might understand my fixation for the translator’s note in the beginning of the book. They show us such intricacies of the stories, which otherwise might have gone unnoticed. I always read and re-read the note many times, to form favourites and to also come back and compare notes. It is fascinating to observe if I also feel the same way as the translator did in this scene from this particular story. The stories though of yesteryears, are relatable even in today’s times.

Neatly divided into two parts this book has 12 translated stories of Saratchandra Chattopadhyay. The first part has stories that depict his perception about childhood and the second part talks about the underprivileged communities and social groups. I like how none of the characters in all the stories are perfect. They are flawed, real and completely believable. The plausibility of the stories makes them endearing in a different manner altogether. Reminiscent of Swami from Malgudi Days I particularly enjoyed the Laalu stories the most and will look out for more as I have come to know that it was an entire series of stories written with him as the primary character. The stories in the second part talk about the harsh realities existent in our society, sadly, till date. Though difficult to pick a favourite out of these masterpieces, if I had to pick one it has to be “A Day’s tale from some fifty years ago”. Moving, heart breaking and yet splendid piece of writing, this story broke my heart and joined it again. This one goes to the “go-to” list of stories that I call my soul food in times of despair.

Overall, a brilliant collection, this book is a must read. I would recommend it strongly. If you have never read Saratchandra Chattopadhyay, even then I would say start with his book. You might just end up discovering a new found love.

This book is like Red Velvet Waffle - melts your heart and leaves behind a warm, fuzzy feeling!