Book Review: The Dirty Dozen- Hitmen of the Mumbai Underworld by Gabriel Khan 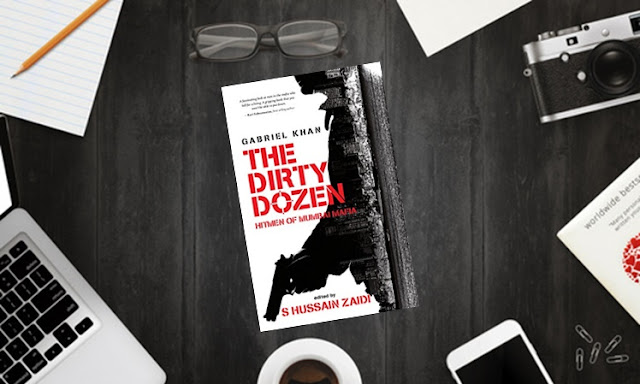 AND THEN I WILL KNOW THAT THERE IS SOMETHING IN YOU! - Chhota Shakeel to Sadiq Jalawar

Munna Jhingada, Farid Tanasha, Baba Reddy… hitmen and executioners all. Each with haunting tales to tell.

The executioner has no remorse. He is the man who strikes the fear of his boss in everybody’s heart. While he has no criminal empire of his own, his barbaric bio-sketch could fill several police case diaries. Those who live by the bullet die by the bullet – almost every last man of them. But in their short reign of terror, they leave a trail of devastation in their wake. In this no-holds-barred book, undercover reporter Gabriel Khan, backed by years of behind-the-scenes work, provides an insight into the lives of twelve of the most vicious and fearless hitmen of Mumbai, giving readers a first-hand insight into what fuels the men behind some of the bloodiest battles and showdowns in the city.

Gabriel Khan is the pseudonym for a veteran crime reporter from Mumbai. With experience of over twenty-five years in journalism—mainly print and stints with television and dotcoms—Gabriel is a reservoir of information on the city’s underbelly. Gabriel has also done a lot of handholding for several budding journalists, many of whom have now established their bylines.

Gabriel Khan also co-authored with S. Hussain Zaidi on his debut fiction, Mumbai Avengers, which was subsequently made into a blockbuster movie titled Phantom, directed by Kabir Khan.

Gabriel Khan has also converted the movie Special 26 into a novella.

Let's start with a confession first. S. Hussain Zaidi remains a personal favourite when it comes to Indian authors writing on crime.I have read all his works and loved them to bits. So despite the fact that the author Gabriel Khan's previous outing Mumbai Avengers failed to impress me , I still went ahead with this one solely for it is edited by S. Hussain Zaidi. And, I wasn't disappointed at all.

It can be easily said that this book is tying all the loose ends in the books written on Indian crime lords till now. It not only shows their grime lives closely but it also depicts their hardships in becoming a name to be feared for. What I like about the author is that he doesn't sound judgemental. His writing is free from any biases he might harbour as a journalist or as an author. He leaves a majority of the conclusion on the reader and that is something I enjoy a lot. Books which give me a slice of real life, however ugly and make me think are my personal favourite and that is the reason this one is loved.

The Dirty Dozen is pacy, thrilling and nail biting as it takes us through the journey of eleven hitmen whose lives otherwise remain unspoken about. Neatly numbering them and tagging them first with the names they became infamous with, the author narrates their stories in a manner that they feel like an adrenaline rush. The writing style is edgy making it a page turner. You are pulled into it and cannot wait to know the whole story. If like me, you have enjoyed movies like Shootout at Lokhandwala, Satya, Company , Once Upon a time in Mumbai etc you might be lucky enough to hear the background music while reading these stories. The description makes the imagery come alive, making it an engaging read. It surprises you, shocks you and at the same time tells you a lot of things you never knew. In all possibility this could just be the tip of the iceberg as the underworld is known to be murkier than our imagination. However this doesn't stop this one from being an impactful and powerful read.

Strongly recommended for all crime lovers, this one should not be missed!

This book is like moong dal kachori - simple, yet promises to brighten up a lazy winter afternoon with its tantalizing flavours!