There are stories of friendship and of love; there are stories that thrill you and stories that leave you shocked. As the author of this book, I expect the readers to take an undeniable journey through the stories, so that by the time they reach the end, they would have accepted and applauded the countless number of emotions, incidents and experiences that make our life what it is; however chaotic they might seem.

:Inspiration behind the title:

‘The Inimitable Chaos Of Life’ is a celebration of those emotions, which are craftily ingrained in human lives. Through this book, I have tried to illustrate them with a veritable tinge of subtlety, not overplaying their effects for the sake of it. There are undercurrents of intensity, but they are not displayed in an outright manner akin to creating pandemonium. It is true that no two situations in life are similar. No two incidents are an exact reflection of each other. They are but as deep and scarring as blazing fire. They are but as exhilarating and enthralling as that one piece of good news you have been awaiting for long. Therein lies the inimitability of life. Therein lies the inimitability of its chaos.

: Inspiration behind the stories:

A writer needs inspiration, a trigger, to start writing a piece of work. Inspiration is the key to any form of art. There have been several inspirations for me too that helped me pen the varied stories of this book. I would like to talk now about some of the inspirations that worked for me in writing this book.

I had always wanted to write a story based on my native place. My native place is a treasure trove of stories. The place is magnificent, enriched with the culture and beauty of my state. Not to say the least, a smatter of memories is evoked in me at the sound of its name. The place has a Shiva temple, which we frequent whenever we visit the place. A visit to the temple during the festival season is mandatory and that is when my mother and grand mother would make us do the ‘para’ tradition, where we are supposed to transfer a handful of turmeric from one ‘para’ (utensil) to another. Although I haven’t mentioned about this tradition in any of my stories, the temple and its premises along with the tharavadu (family house) find place in my story ‘Through The Kaleidoscope’.

I share a rather special relationship with my brother, who is one year younger to me. We have had a beautiful childhood together, where we would fight, yell, make fun of each other and hang out together watching cricket matches. It was no surprise to me that I wanted to write a story based on sibling love, hence. The story ‘Sara’ is all about the affection and love the character Thomas has for his sister Sara.

The new of a broken family pains me deep. I am someone who is against people nursing the bad wounds in a relationship and striving hard to make the relationship work even when both parties continue to hurt each other. But still, I believe that both of them should give their best effort before they declare a relationship dead. ‘Forlorn Soul – The story of Ananya’ is a story told from the point of view of a daughter who is a witness to the broken relationship of her parents.

Is there anything as painful as unrequited love? The concept of the story ‘Unsung Melodies’ isn’t inspired from my life, but from the many stories I have been accustomed to as a woman. The stories have had a scarring effect on me and I believe the same has found its way into this story.

5. Day to Day Happenings Around the World:

Some of the stories that I have written have imbibed inspirations from the many happenings and events from around the world that have struck my eyes. One such incident or rather a disaster that has most to do with the story ‘For A Reason’ is the earthquake that shook India and Nepal in 2015. Countless lives were lost and the land was destroyed beyond reclaim. But what struck me most were the miserable lives of the people who have survived the disaster. The story is based on the life of one such woman and how the protagonist of the story dissects her life.

There are nine more stories in the book and they all have been inspired from one element of life or the other. A good movie, an evocative piece of music, intriguing lyrics, and luscious mood changes of nature – they all have instilled a magical desire in me to write more and write better. I am indebted to all forms of art that I have acquainted with in my life for making me an author.

All the stories in TICOL are fictitious but they all are raw, fresh and are as close to life as possible. The book is slated to release in a few days’ time and I hope the stories touch your soul too as much as they have touched mine as I wrote them.

Before I wind up, I would like to present to you the book cover along with blurb. I hope you are intrigued enough to give the book a read. 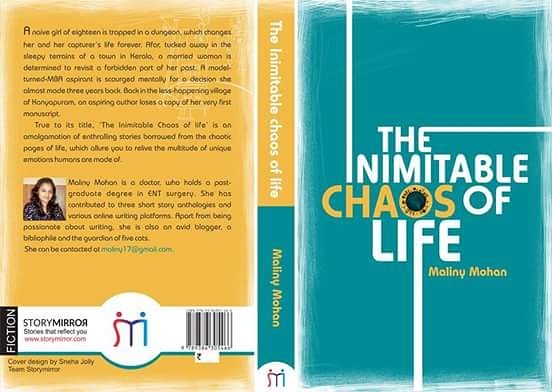 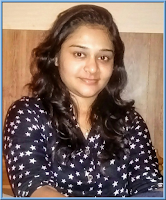 Maliny Mohan is a doctor, who holds a post graduate degree in ENT surgery. She tends to her passion for words whenever she finds time away from her professional life. She was born and brought up in Kerala, where she spent her summer days in the exhilarating company of her friends and luscious greenery. She has contributed to three anthologies – two short story collections named ‘Love and other Enchantments’ and ‘Shades of Life’ and a poetry collection named ‘Garden of Love’. An avid blogger and an ardent admirer of subtleties, her dream of becoming an author sprouted wings in the pages of her blog. A Piscean by birth, she is passionate and strives hard to listen to her heart, every time it beats out of sync. Her tales mirror her eye for beauty in its varied forms. Apart from being passionate about writing, she is also a trained dancer, lover of solitude, bibliophile and the guardian of five cats. ‘The Inimitable Chaos Of Life’ is her debut solo work of fiction.
Email Post
Labels: Anthologies Debut Fiction Guest Post Indian author Maliny Mohan Short stories Story mirror