Pan Macmillan are delighted to reveal the cover for Ken Follett’s new novel A Column of Fire, which will be published across the world in September 2017.

Ken Follett’s first Kingsbridge novel, the masterful epic The Pillars of the Earth, enchanted millions of readers with its compelling drama of war, passion and family conflict set around the building of a cathedral. The sequel, World Without End, was a number one bestseller in the UK, US and Europe, taking readers back to medieval Kingsbridge two centuries later, as the men, women and children of the city once again grappled with the devastating sweep of historical change.

Opening in Christmas 1558, A Column of Fire will take readers back to Kingsbridge once more.

Jeremy Trevathan, Publisher of Macmillan Adult Books said: ‘Publication of a new Ken Follett novel is always a major event, but a new Ken Follett Kingsbridge novel, set in the fictional town that readers first encountered in The Pillars of the Earth, is hugely exciting. We’re all delighted at Pan Macmillan to be helping to bring this wonderful novel to readers in 2017.’

Ken Follett announced the title while on a research trip to Seville, Spain:

‘It is a spy story set in the sixteenth century, during the reign of Elizabeth I of England. There were many assassination plots against the Queen, so the people around her set up an espionage system to foil those sixteenth century terrorists. This was the beginning of the British secret service that eventually gave us James Bond.’ 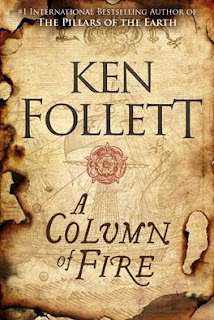 As in Ken Follett’s other bestselling novels, readers follow a cast of characters across their lives, allowing insight through their eyes into the most fascinating and tumultuous historical events of the period: in A Column of Fire, we follow the story of young Ned Willard. When Elizabeth Tudor becomes queen, all of Europe turns against England. The shrewd, determined young monarch sets up the country’s first secret service, to give her early warning of assassination plots, rebellions and invasion plans. Ned finds himself on the opposite side from the girl he longs to marry, Margery Fitzgerald.

Over a turbulent half-century, the love between Ned and Margery seems doomed, as extremism sparks violence from Edinburgh to Geneva. Elizabeth clings precariously to her throne and her principles, protected by a small, dedicated group of resourceful spies and courageous secret agents.

Ken Follett was twenty-seven when he wrote Eye of the Needle, an award-winning thriller that became an international bestseller. Recently, he has written the bestselling Century trilogy, which comprises of Fall of Giants, Winter of the World and Edge of Eternity.

Ken Follett’s 30 novels have sold over 160 million copies to date, published in 30 languages, and the latest novel Edge of Eternity (published in September 2014) went to No. 1 in the UK hardback chart.