‘My eyes, they rain all the time

My eyes, they rain all the time

Till I see him in mine’

When Shrimant Bajirao Peshwa, feared by even the mighty Mughals, hears the exquisite Mastani sing, the passion that sparks between them grows quickly into a raging fire.

The Peshwa defies his orthodox Brahmin heritage, declaring his love openly for the half-Muslim dancer, in the face of fierce opposition. A man way ahead of his time, Bajirao causes outrage when he marries Mastani, bringing her into his home as his second wife.

N.S. Inamdar’s timeless tale, that has inspired both film and television, brings alive the romance, intrigue and valour of the eighteenth-century Maratha empire. This irresistible novel is one of India’s favourite love stories.
Behind the book 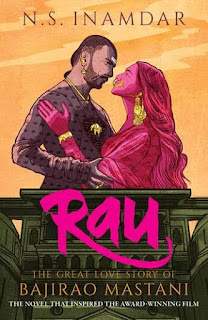 About the Author & Translator


Born in a village in Maharashtra’s Satara district, N.S. Inamdar (1923–2002) was one of India’s foremost Marathi novelists, with a writing career spanning over five decades. He is the author of sixteen historical novels and an autobiography.

After having watched the movie more than a dozen times till now it was a but obvious thing for me to choose this book for review. Little did I know the surprises it held for me.First of all just to clarify I loved the movie. Every inch of it, the detailing of camera work, the powerful dialogues, the gorgeous dresses, the heart touching songs, the poignancy of emotions - every single thing. And I wanted to read the book solely to capture its magic once again and let it engulf me. Till now I felt the movie is a masterpiece but after reading the book I feel this masterpiece deserved more.

Rather what I experienced was something much more than the movie. This book is a much detailed version of the whole story and the movie is just a minuscule part of it with more fiction and substance added to it than the original. The book is one huge package of action, thrill, adventure, romance, emotions and most importantly magic. Yes this book has magic in it. This book has the answer to a lot of questions which came to my mind when I watched the movie.

There is lot more to Bajirao and Mastani both than just their love for each other. This book puts that all for display making you feel for them more emphatically than you felt after watching the movie. The roles of Chimaji Appa, Radhabai and many other prominent characters are clearly defined in the book making more sense at the larger picture. Till I read this book I didn't know how important this book was considered in the Marthi Literature but now that I have read it,  I feel privileged.

The translator has done a superb job in ensuring that none of the words and their meanings are lost in translation. The language with its swiftness intact is what makes this book a roller coaster read. You want to reach the end and yet you don't want the ride to end. You are enjoying it so much that you have tears of joy flowing out of your eyes.That is the magic of the book. The characters are so brightly painted that you will fall in love, again with both Bajirao and Mastani albeit a bit more than what you did in the movie.

Strongly recommended for one and all - lovers of romance, people who enjoyed movie, history lovers and ofcourse people who enjoy a good well researched read! This one promises to be all.

This book is like hash brown- an old classic dish but yet a favourite with delectable flavour.