Skip to main content
Labels
Posted by Privy Trifles May 01, 2016

Book Review: Daughter of the Sun (Cult of the Cat series, Book 1) by Zoe Kalo

Cult of the Cat series blurb

According to ancient Egyptian prophecy, three feline goddesses—Bastet, Sekhmet, and Mafdet—would one day be reborn as triplets during a solar eclipse.
But someone—or something—separated them at birth. Because if ever they were reunited, they would unleash a blistering power that could destroy the world.
In an adventure where the past confronts the present, and blood, betrayal and secrets abound, the triplets face each other for the first time. And discover they’re the only force able to stop the evil god Apophis from enslaving humanity.

Daughter of the Sun, Book 1 - blurb

Sixteen-year-old Trinity was born during a solar eclipse and left at the doorsteps of a convent along with a torn piece of papyrus covered with ancient symbols. Raised by nuns in the English countryside, she leads a quiet life until she’s whisked away to the Island of Cats and a grandmother she never knew.

But before they can get to know each other, her grandmother dies. All that Trinity has left is a mysterious eye-shaped ring. And a thousand grieving cats. As Trinity tries to solve the enigma of the torn papyrus, she discovers a world of bloody sacrifices and evil curses, and a prophecy that points to her and her new feline abilities.

Unwilling to believe that any of the Egyptian gods could still be alive, Trinity turns to eighteen-year-old Seth and is instantly pulled into a vortex of sensations that forces her to confront her true self—and a horrifying destiny. 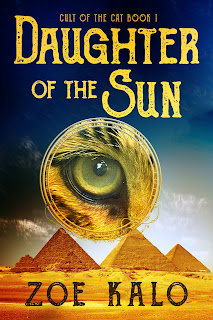 Buy the book from Amazon HERE


A certified bookworm, Zoe Kalo has always been obsessed with books and reading. Reading led to writing—compulsively. No surprise that at 16, she wrote her first novel, which her classmates read and passed around secretly. The pleasure of writing and sharing her fantasy worlds has stayed with her, so now she wants to pass her stories to you with no secrecy—but with lots of mystery…

A daughter of adventurous expats, she’s had the good fortune of living on 3 continents, learning 4 languages, and experiencing a multicultural life. Currently, she’s working on a Master’s degree in Comparative Literature, which she balances between writing, taking care of her clowder of cats, and searching for the perfect bottle of pinot noir.


The story begins with Trinity and revolves around her. The character of Trinity has been very well described in a manner that it looks believable. I admire her strength the most throughout the book.  The way the author has managed to merge various genres of action, thriller, romance and little bit of suspense with fantasy is what makes this book stand out amongst all the others.


With the surge in fantasy authors it is a huge challenge for every book to be different from the other and stand out amongst them all. In this what helps an author is his or her writing. That is exactly what reflects in the author's book, her writing is very powerful and stems from a lot of research gone behind creating the plot and its characters.

The book is a like a roller coaster ride with enough twists and turns to ensure you are hooked to it till the last page. I almost stayed awake at nights because the curiosity of "what next?" didn't let me sleep.  For a debut novel the author is very promising. Her writing holds the reader from the first page and till the last, leaving them wanting more.

I am surely looking forward to part 2 excitedly as I need to know what happened with Trinity there are so many unanswered questions in this part that have left me curious.Enjoyed reading this book!

Strongly recommended to fantasy fiction lovers, this one will leave you asking for more.


This book is like marmalade - a very balanced spoonful of tangy, bitter and sweetness deliciousness.