Standing behind was an unusually attractive lady. She wore a dark blue, chiffon saree which set off her fair complexion even more. Other than a thin gold chain with a tear-drop pearl pendant on her neck, she wore no jewelery. Her lips were pale pink, with no lipstick. Only the dark make-up on her eyes made her look even more unfathomable. 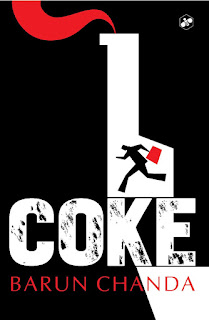 Thus begins Coke, with this chance encounter at Kathmandu airport. But the plot thickens when the lady requests him to include her suitcase as part of his checked in baggage and then does a vanishing act, once the aircraft lands in Calcutta. What follows is a riveting page-turner, replete with unexpected twists as you encounter gangs warring over narcotics, policemen, functionaries, and a sinister master-mind who will stop at nothing to get what he wants. The furiously paced narrative takes you from the sleepy airport of Kathmandu to the packed streets of Calcutta, a mysterious mansion on the outskirts of town and an unforgettable chase-sequence through New Market.

From the author of the acclaimed Bengali novels ‘Kidnap’, ‘Shaaper Jhaanpi’ and ‘Robibar’ comes a high-octane thriller that’s seriously addictive and keeps you hooked till the end.

At the first ring, Rustam picked up his mobile. It showed Bob’s number on the screen. He put the mobile to his ear and listened.

“I’m speaking from the loo…there’s news for you.”

“Why from the toilet?”

“Because no other place in the house is safe to talk to you,” Bob whispered back.

“In the evening, after my duty’s over.”

“Didn’t you say you have day-night duties from now on?”

“They are letting me go for now in the evenings. But not at your place. It’s too risky.”

“Hello, someone seems to be knocking at the door.”

The phone call ended with the roar of the flushing toilet.

“Why didn’t you get in touch with me the last three days?”

“There were problems.” Bob let out a thick cloud of cigarette smoke.

“It’s getting increasingly risky to come out and meet you like this.”

Though they stood in close proximity, their faces looked away in diametrically opposite directions. Unless you looked carefully, it was difficult to make out they were actually talking to each other.

Rustam idly looked at the snarling evening traffic, his hands on the railing of the park.

On a bench inside the park, a young couple took advantage of the darkness to get cozy with each other. Bob simply couldn’t take his eyes off them.

Bob’s voice trailed off as his eyes were riveted on the frenetic activities of the couple on the bench, their bodies wrapped under a shawl.

“Yes, what about the red suitcase?”

Rustam cast one sharp glance at Bob, before looking away.

Bob’s face got hidden in a cloud of smoke.

“What makes you so sure?” Rustam’s eyes narrowed as he watched Bob’s face intently. For some inexplicable reason, he had never been able to fully trust Bob right from the beginning.

“One of the middle rooms on the first floor…was kept under lock and key all this while.”

Bob’s eyes were still very much on the couple on the bench.

“Bob…why aren’t you saying anything?”

The couple’s bodies were locked in a tight clinch under the shawl.

“I saw one of the sentries take the suitcase away from the middle room to boss’s bedroom.”

Rustam kept his eyes on the Central Avenue. A traffic jam was forming near the crossing, adjacent to the park. An eccentric man, with a wooden stick in his hand, was trying to regulate the traffic, in the process, making things much worse for everyone.

“Did you get to see where he hid it inside the bed room?”

Bob watched fascinated what the couple was doing on the bench, underneath the shawl.

For a while both stood facing away from each other, in silence.

At long last, a cop appeared on the road and was seen trying to control the traffic. Inside the park, the couple was still locked in a tight embrace. Bob puffed at his cigarette and blew another cloud of smoke from his mouth. Rustam fanned with his hand irritably, trying hard to keep the smoke away from his face.

Bob looked directly at Rustam for the first time in the evening.

“I think Harry is going out of town very shortly.”

“Outside Calcutta, or outside India?”

“How should I know that?” Bob answered irritably.

“Somebody came from a travel agency with a sealed envelope. I signed and received it.”

The traffic at the crossing had eased by now. The couple on the bench sat still, exhausted.

Rustam noticed Bob smiling at them.

“What are you smiling at?”

Bob took one last puff from the cigarette, flicked the butt end casually towards the footpath and walked away. After a while Rustam came and sat at the bench in the park.   The couple got up from the bench and walked away, each in a different direction. Rustam watched them leave, took out the mobile from his pocket and started speaking into it in a low voice. 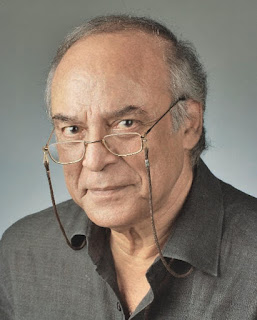 In so far as the pursuit of any true vocation is a life in itself, Barun Chanda – advertising guru, actor and writer, may be said to have had three. Born in Dhaka, he did his Masters in English at Jadavpur University. Following a brief stint as a lecturer in English, he embarked upon a career in the creative department of advertising that spanned more than 30 years, won him numerous awards and culminated in his tenure as Creative Director at Clarion McCann.
Acting occupies the second of his three worlds. In 1971, he scorched the big screen as a high-flying executive, playing the protagonist in Satyajit Ray’s ‘Seemabaddha’, and winning a special President of India Award for his performance. After a hiatus that lasted over two decades, he returned to the screen during the 90’s, and has since then acted in numerous TV series and more than 35 movies. Tackling Bollywood and Tollywood roles with equal aplomb, he has distinguished himself in films such as Lootera, Roy, Chotushkone, Aborto, MIshor Rohoshyo, Nayanchampa-r Dinraatri , Bela Sheshe and Jogajog. Chorabaali, where where once again he plays the protagonist, is his latest venture.

Barun’s third passion is writing. A regular film reviewer and contributor of articles to major dailies, in the last eight years he has published four highly acclaimed and successful novels in Bengali. His work has played a major role in establishing the adult thriller genre in Bengali literature.
Coke is his first novel in English.