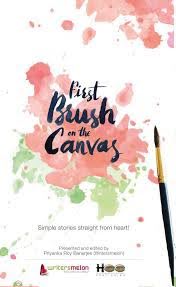 Vampires, guardians' adventures at night. Coffee, love and a new couple. Imli and her mother in a complex web of darkness. A small town girl confused about virginity. Michael Jaikishen and his writing endeavours. Child adoption by a gay couple. Mahabharat - a modern tale in an epic form. The spine-chilling tale of Tina and Uncle Joe. A juicy love story by our guest author Sujata Parashar. These and many other unputdownable stories in this book.

First Brush on the Canvas is an anthology comprising selected stories from Melonade (2014), a nationwide writing marathon organized by Writersmelon.com.