Shopping with Amazon: A joke or reality! 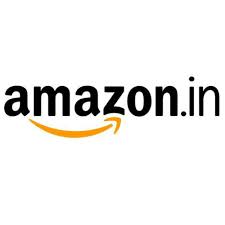 Since the time online shopping was introduced as a concept to India, Amazon was always looked upto as the Big Daddy of them all for having been there, done that. Flipkart was considered the pride of India and everyone else was like a surprise package everyday coming out with concepts that just made a buyer go Wow.

I will go to the others maybe later but today I dedicate this post to my experience of shopping with Amazon. As I am still trying to understand whether it was a joke or reality I leave it to you readers to conclude after reading the whole post.

My first experience with Amazon was in December 2014 when I purchased a Hard drive from them after a lot of insistence from a friend who was raving about the great offers they had. The deal went through fine as when I compared the prices to other websites ( Including Flipkart) I realised the prices were ridiculously low and hence ordered it.

The second experience came in March 2015 when my debut book Metro Diaries was listed on both Flipkart and Amazon for pre-order. Here comes the twist. Flipkart's price and Amazon's price had a huge difference which was still okay. The problem is Amazon kept changing my release date based on its own whims and fancies. New to this business, I wrote a strong email to my publisher asking about it.

When Flipkart says the book has released how can Amazon still show it in pre-orders! This is like sending out a wrong message to the readers. Moreover because of the huge difference in the prices at various websites most of the people had preferred ordering it from Amazon and NONE had received the book. The only condolence was a weekly email which kept informing them about the so called delay in the book's dispatch. Mind you, no reasons or explanations or clarifications.

Once I had exhausted the free author copies I also tried ordering the book ( in a number which was more than  1-2 copies) to understand what my friends and readers were experiencing. Now my publisher had very clearly told me that this was beyond his control as this was not his purview. In his words, "basis the popularity of the author and the demand of the book" they can change the release date. (I have an email stating this!).

So my order kept getting postponed for over a month and I waited patiently to see what next. One fine day they decide to dispatch my order without checking with me after almost 45 days. There was no one home, and the order was returned back. On asking them to re-dispatch it they told me as a matter of policy they have already initiated my refund as they don't re-dispatch stuff. And here I was waiting like a fool for my books to reach me since last 1.5 months!

In the hullabaloo of my new book I completely forgot checking about the refund which as you might have guessed was huge and then again after like 3 weeks I ask them to which they say the order was delivered! (I almost fainted) after a lot of cross checking finally they processed my refund. And when I wrote a long email highlighting my dissatisfaction they gave me a free next day delivery on my order stating that the order was more than the number of copies they had and hence the delay. I had requested them to keep the customer informed about any such reasons as it gives out a wrong message. All said and done I was back to being a happy customer.

Sometime last week I order two things from Amazon. A mobile cover and a book-  the delivery date categorically showing as 8th June to 11th June with no option of next day delivery on the products. One of the reasons for opting for both from Amazon instead of Flipkart was once again the strangely huge difference in prices. I however went  ahead place the order and contact Amazon with my order number requesting them to expedite my order as urgent citing the reasons for the same. I was spoken to very nicely and assured both the products would reach me by the 10th June without fail. I was personally assured time and again as I kept telling otherwise I will have to cancel the order.

Till 8th June the book didn't get dispatched. So again I go back to the customer service where I am told, " I have checked your order and I see that it is stuck at our fulfillment center. As a reason, it has not been dispatched yet, so I would request you to place a new order for the same. And to compensate for this I'm issuing a Gift Certificate of Rs. 100 which you can use for your future orders. We certainly didn't expect this to happen. Please accept my sincere apologies for the inconvenience caused to you." in like 3 minutes flat and this was enough to make me loose my calm.

I asked the personnel as to why wasn't I informed in the last few days that my order was accepted. And when I asked about the next day delivery option he said my Pin-code never had it ever! I asked him why was your team even offering me that then, no answer except apology and issuing me a GC. I told him a hundred rupee GC for all the trouble I have going over till now is not important what is important is there is a reason a customer comes to you sparing his/her time and money, choosing you over a thousands of other options and this is what he gets.

Now today when I receive my mobile cover imagine my horrors of horror when I see the invoice attached to it which stated the price of the product almost half of what I had paid on Amazon. Or rather to be mathematically correct 80% . Check their page HERE and then check the images below ( Please excuse the quality, the receiver didn't consider the voucher to be important in my absence. I somehow managed to salvage it!) 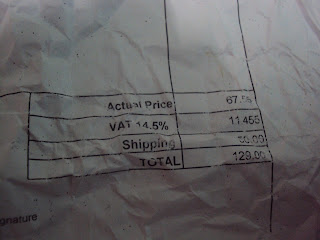 Imagine what their site still tells me about my now-cancelled order!

I kept on arguing and they kept on apologizing without any proper solution to this. I am at my wits end and this post was the only way I could vent it out. Least to speak, I am done with it for sure!