Skip to main content
Labels
Posted by Privy Trifles May 08, 2014

Spotlight Review: The Revenge of Kaivalya by Sumana Khan

The Revenge of Kaivalya by Sumana Khan 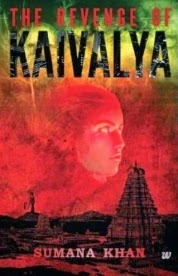 The Blurb
Deep within the womb-like forests of the Western Ghats, an entity manifests itself at the malevolent moment when the ocean rises to devour hundreds of thousands. Kencha, an unwitting witness to Its birth, is soon found dead – his body branded with a strange message written in Halegannada, an ancient version of modern Kannada. Even as Dhruv Kaveriappa, Chief Conservator of Forests - Hassan division investigates Kencha’s death, he senses an unseen danger in the forests of Kukke, Bisle and Sakleshpura. Animals drop dead; plants wither away and just as he feared, the forest claims its first victim. Shivaranjini, on vacation in Sakleshpura, suffers a devastating tonic-clonic seizure moments after she returns from a visit to the forest. Soon, she begins to exhibit a bizarre personality disorder. Perhaps there is an outbreak of an unknown rabies-like disease? Or, as ridiculous as it seems, could it be a case of tantric witchcraft?
The truth unfolds in a dizzying maelstrom of events - a truth far too terrifying to comprehend 
In the early stages of my manuscript, I knew the title of my novel had to be the name of the principal character. And it could not be just any name. It had to fit into the storyline - from a time perspective, as well as setting the atmosphere. It had to sound ancient and also define the character. Tall order!
As I read up on the history of Vijayanagara, I hoped to come across a good, strong name...but history, largely, is about men and their wars and conquests. I hoped to select a name from our puranas. But nothing clicked. What about our stotras? Maybe the lalitha sahasranama? Or ashtalakshmi stotra? One evening I sat mulling on 'Kausalya'...thanks to the most famous line 'Kausalya supraja Rama purva sandhya pravarthathe' from the Suprabhata :) I went to bed with that line in my head.
The next morning, somehow, ‘Kausalya’ had transformed to ‘Kaivalya’. I did not remember coming across the name in any of my previous research. Curious, I looked up what ‘Kaivalya’ stood for. And was fascinated.   Read More ........
Stalk her @