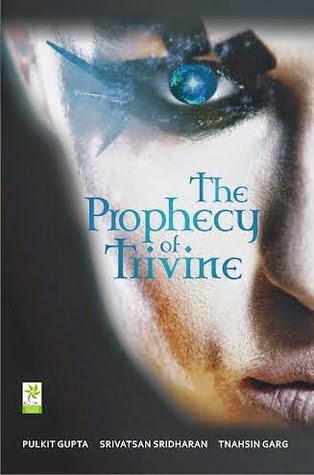 Blurb
An emissary of an advanced alien race travels to the Earth to undertake responsibility of an experiment that has gone out of control. The outcome of this fateful experiment, which was conceived millions of years ago by her species, now rests in her hands. As she prepares to deliver her final judgment, she comes across three young men in a sacred forest who change her life forever.

These three men- a scientist, a hacker and an artist, happen to take refuge in that forest, trying to escape from the oddities of their own unfair lives. Struggling with their dreams and demons, they begin to explore the dark and paranormal behavior of the forest by forging a companionship. From the rare flora and fauna breathing alive on the ground to the deadly wide expanse of the whimsy black sky, everything they find is yet another puzzle unsolved.

Little did they know that four of them hold in their hands the future of mankind and much beyond imagination, they are connected through an ancient Prophecy that was long lost in the sands of time

the prophecy of trivine - Video Maker

Srivatsan is a Computer Scientist, who recently graduated with a Masters degree from Purdue University in the United States. He completed his Bachelors in Engineering from Thapar University, India in 2010. Along with computers, he is extremely passionate about writing. Most of his artistic ideas have taken shape in the form of short stories, speeches, travelogues, and essays. Some of them can be found in his BLOG

Tnahsin was born and brought up in India where he got a Bachelor's degree in engineering. After that he travelled to United States in search of higher education and adventure, and ended up getting a Master's degree in 2012.  When tired of his scientific pursuits, he's often found scribbling something unintelligible on some decayed corner of the Internet. You can find him in his BLOG

Pulkit is a Computer Science professional who completed his Bachelors in Engineering from Thapar University, India in 2011. He has been an avid reader and an enthusiastic writer since his childhood days. He maintains a number of blogs which are in various stages of decay, but his most recent short story work can be found on his recently created BLOG