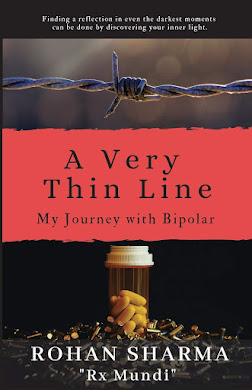 One in five people living with bipolar die by suicide. Forty percent of people with bipolar have a run-in with the law at some point in their lives. This is a story not often talked about but necessary to be told. Rohan Sharma takes the reader on a confessional and genuine journey through his bipolar episode that left him incarcerated and serving time in jail. He does not shy away from the darkness that exists in this reality and encourages others living with mental illness to seek the help they need so they, too, do not end up in unfathomable situations such as he found himself in. Despite the darkness he faces, he finds a way to focus on the light and the positive, and while incarcerated makes the biggest discovery of all: himself and who he wants to be.

Living with an invisible illness is nothing short of a treasure hunt daily. You are looking for new reasons to get out of your bed, to stay alive, and most importantly to keep going. A Very Thin Line by Rohan Sharma a.k.a Rx Mundi is one such reason!
A poignant memoir about living with bipolar, where he talks about these struggles and achievements giving a glimpse into his life this book is evocative, heart-wrenching, and life-altering. Rx Mundi (Rohan Sharma) is a mental health advocate from the suburbs of Philadelphia. He began public speaking subsequent to serving a twenty-three-month jail sentence after pleading guilty to an armed robbery that took place in the Fall of 2011. At the time, Rohan was a medical student at Drexel University. However, due to his mental illness being misdiagnosed, he was given the wrong medication which induced a psychotic episode.
When do you abandon yourself? A very normal question asked by a therapist online led me to think about the situations where we are quick to give up on ourselves, in a way abandoning us. This was exactly the thought reverberating in my mind as I read Rx Mundi’s journey. He never abandoned himself, all throughout his journey to the prison and even after. He has held on tightly to himself as he heals and helps others heal through his music and words. Written with a desire to bare it all, his unflinching determination is clearly visible throughout the book.

‘When the brain is severely deprived of sleep, it will go to any means to get the rest that it requires.’

Mundi’s observations about everything around him, including his mental condition and life in general are remarkable. He comes across as someone who looks like he was in complete control of the situation till someone flipped a button inside his mind and things changed, for the worse. That someone in his case was the medication he was on for anxiety which was triggering his bipolar to an extent that one could have manic episodes.

‘I cannot explain why I wanted to fit in and impress other people who I considered as only projections of my subconscious mind.’

His honesty is touching, especially the way he talks about his childhood and growing-up phase.
Written in a lucid manner, the story hits hard from the first chapter itself. Neatly divided into short chapters, each chapter begins with a quote that sets the tone for what is to arrive in that chapter. Each of these quotes have been chosen wisely, as they not only add meaning to the chapter but also prepare a reader for what is in store next. Like Mundi says in the preface, this is not a jail survival guide. Unlike other motivational authors who tell you what to do in order to improve your life, Mundi does the reverse. He actually leads the way by showing his life with its pitfalls intact and shows how he came out of it all, triumphant. He gives you hope and a promise that tomorrow can always be better than today, provided you are willing to work on it.

‘Even after all I had done in my psychotic state, I could still function in society, which is something many inmates of A block could not boast.’

It is said that when you can narrate your story without crying you have healed. Mundi surely has come a long with as he not only can narrate his story without crying now, but he can also motivate thousands of others to not let an invisible illness define their life.
Be it his ‘This is good’ story or his vigorous workout regime, his approach to life was refreshingly different in many ways. The ability to look back at the life and see how far you have come, to be able to analyze your mistakes and correct them is no mean feat and Rx Mundi seems to have done it exceptionally well. ‘And then there was that night when it is shown to me What was always in plain sight, but few will ever see.’ Bringing together his experiences of having lived with an invisible illness and of witnessing the perils of being a jail inmate at a young age, author Mundi has made A very thin line more like a heart-to-heart conversation. As you witness him falling and then getting up again to face life, you cannot help but feel overwhelmed. Somewhere towards the end of the book, he begins to feel like a friend whom you have known for years now and are now proud of him. This book is a recommended read for everyone who needs a pinch of hope and a taste of life just to keep striding ahead despite all that life brings along!
Email Post
Labels: 2022 Biography Book Review Memoir Rhythms and Bones Press Rohan Sharma Rx Mundi