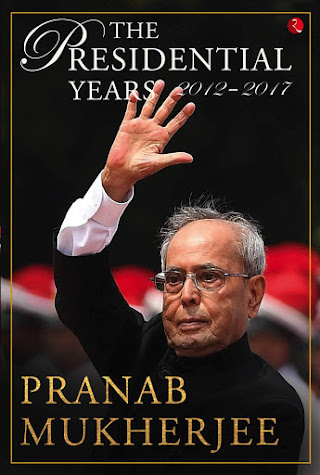 The Presidential Years gives a fascinating account of how one of the country's most respected veteran politicians reshaped the functioning of Rashtrapati Bhavan and responded to tumultuous events as the country's first citizen, leaving behind a legacy that will be hard to match. Pranab Mukherjee became President of India after having spent several decades in politics, and there was great speculation over how he would approach his new bipartisan role after having been associated with a political party for so many years of his life.
By the time he had served his term, Mukherjee had won the respect and admiration of people from across the political spectrum, including those who were his rivals when he was a political figure. He had the occasion to work with two prime ministers, belonging to two parties who were (and are) fiercely opposed to each other, and he managed to do so with aplomb.

Pranab Mukherjee entered Parliament at the age of thirty-four and rose to become the 13th President of India. A man of unparalleled experience in governance, he has the rare distinction of having held various portfolios—sometimes concurrently—as Minister of Defence, External Affairs, Commerce, and Finance. A seasoned parliamentarian, he was elected to the Rajya Sabha five times and to the Lok Sabha twice. He was a member of the Congress Working Committee, the highest policymaking body of the party for a period of 23 years, till he became the president.
A soft-spoken man of steely determination, Pranab has been the go-to person in times of crisis, both for Congress and others. His role as a consensus-builder and his ability to forge unity amongst diverse political parties has earned him the respect of one and all. Pranab Mukherjee’s grasp of international relations, financial affairs, and parliamentary processes combined with his phenomenal memory make him one of the most important and admired politicians of contemporary India.

India has witnessed dynasty politics for decades. At the same time, we have also seen leaders work consistently towards the betterment of the nation despite their personal goals not being fulfilled at times. Examples of such leaders include L.K. Advani, Pranab Mukherjee, etc.
Both stalwarts in their own fashion, their political careers have been aggressive and trailblazing in many ways. Yet decades later, when it was time for their final goal to be achieved (which was to become the Prime Minister of the country) both were sidelined by their respective parties for various reasons.
A book like this is actually a reminder for us to go back to whenever we forget the contribution of an individual in shaping the country's history.
It is interesting to note that Pranab Mukherjee has written his biography in different parts. Starting with The Dramatic Decade: The Indira Gandhi Years (2014), followed by The Turbulent Years 1980-1996 (2016) and The Coalition Years -1996-2012 (2017), this book is the latest in his series of biographies. Well, a life like his, definitely cannot be captured in one book. And this series is a testimony to it!

Leadership of a party in times of crisis has to evolve a different approach.

As the title suggests, in this book we get to witness the Presidential tenure of Mr. Mukherjee and his observations about the country's economy, social, finances, international relationships and other aspects. Considered to be one of those few presidents who worked with two Prime Ministers during his tenure, who were both fiercely opposed to each other, Mr. Mukherjee was President who was both loved and revered.
Written with honesty and simplicity, this book is extremely powerful. In a way, once you are done reading the book, the reader is bound to have witnessed the grandeur of the past, the immense possibilities of the future, and the challenges of the present so closely.  The ex-President has handled the narrative very nicely. There is no bitterness or to put it in simpler terms, ranting in the book. His voice is more of sharing and making us aware. It feels like he is in conversation with us, baring his heart.
He shares with us various intimate details about the work he did as the President of the country, of the treaties that were signed during his tenure, and the different projects that were initiated. However, one of the strongest chapters for me has to be one where he discusses the mercy petitions received by the President of the country. It was extremely moving and disturbing to read some of the cases as he explained the reasons behind the decisions taken (of pardoning or not pardoning).
More than a reader, as a citizen of the country I felt extremely happy to read the chapter called My Prime Ministers where he shared his experiences of working with different Prime Ministers all throughout his political career. Keeping the dignity intact, as he was while he was actively working, the narrative does not for once feel like opening old wounds or digging old skeletons from the cupboard. He maintains the narrative to be respectful and stoic. It is indeed commendable to be able to write it neutrally without holding any grudges or allow them to reflect in your choice of words. In this, he has not only maintained his own dignity but also of the people he worked with. And this is perhaps one of the many reasons why he was/is loved and respected by everyone.
I need to add here, the publisher Rupa Publications has done a brilliant job at designing this book and its entire packaging. With a sharp cover image on a textured paper and a hardbound book, this is definitely a collector's edition which anyone who is interested in politics would love to have on their bookshelf.
Definitely recommend this book, to celebrate the life of a man who has witnessed the story of India till now at close quarters and is now giving us a glimpse of it through his biography.

You can buy your copy: