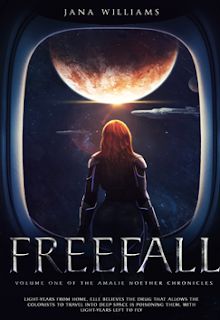 The deep-space transport ship, the Vera Rubin, is light years from Earth when botanist Elle Silver begins to question the use of their space-travel drug, HCH.  Elle notices a growing number of her friends and  fellow colonists awaken from their 90-day sleep cycles exhibiting a variety of negative side-effects and she begins to believe the drug is the culprit.  Some of the effects are minor, dry eyes and lack of appetite. Other symptoms are a bigger concern on a tiny ship packed with colonists.  With each sleep cycle completed, more and more colonists awaken both confused and barely concealing a simmering rage - rage that could be a catastrophe on a ship as crowded as the Vera Rubin.  Elle needs proof, but she also needs a plan. If the drug that allows them to travel deep-space is at fault, what then?  Elle and her friends Ashok, Achebe and Jin-Hai are pressed to their limits to find a solution to their problem before the ship erupts into chaos... with light years left to travel.

“Aaakkkkaaah,” Elle gasped as light like a thousand million suns seemed to explode behind her eyes, catapulting her into consciousness. Sleep apnea forced her to consciously attend to what was supposed to be an unconscious act. Elle was certain she knew intimately how it felt to die—she did it over and over again in her sleep. She lay still for a long moment, shaking off the dregs of her harsh awakening. Suddenly she opened her eyes. I had a dream. Which is weird; I hardly ever dream.

With her eyes now open, Elle was grateful for the deep shadows in the Skein. Scattered before her were only dim pools of light created by the pale glow of a monitoring station or data readout screens. The checkerboard of dim light and utter darkness was designed for sleep. Not just any kind of sleep, though—the Skein was made for folded, deep-space travel sleep, for human hibernation.

Peering around, Elle could vaguely identify the sleeping shapes of colonists floating weightless above and below her in the zero gravity of the ship’s inner core. They were tethered to the Skein via long filaments linking one sleeper to another like a daisy chain via a supple towing line. Each human hibernated for a three month cycle, gently tugged along by the Skein rather like balloons.

Over the course of their ninety-day sleep cycles, colonists passed through medical stations that performed muscle-tone tests and various neurological scans, body mass index tests, and more, until the Skein released them at the end of the ninety day cycle. They were netted and pulled into a brighter area where the onset of light coaxed them into wakefulness again. Elle was the sole exception. She hibernated like the other colonists, but her sleep was more erratic—uniformly unpredictable, in fact.

Now fully awake, Elle released the magnet that anchored her to the Skein and began pulling herself down towards a glowing iris of light at the bottom of a deep well of darkness. As she passed other colonists still deep in slumber, she took time to look into their faces. They were people she had trained with for the past fifteen years, as a cadet. Some faces were familiar, and so peaceful in sleep that she felt tempted to smooth the hair back off their faces as a mother would. Except that none of them had any hair. Each colonist was lasered head to toe before entering the Skein so the electronic scanners could accurately read the barcodes on the backs of their heads or the soles of their feet and attribute each medical test to the appropriate colonist’s file.

Elle encountered a colonist she didn’t immediately recognize and stopped to examine his face. Frowning, she gently grasped him by the shoulder and turned him so that one of his feet faced a nearby barcode scanner. A name immediately popped up on the screen, and Elle recited the name to herself while looking into the cadet’s face to memorize it. Grinning, she released him back to his journey in the Skein and floated on.

She was slowly approaching a distant junction that would pull her through the first airlock and into the waking chamber. Instead of waiting to be towed, Elle pushed off abruptly from her handhold on the Skein and cartwheeled towards the junction. Elle was fairly confident that she could stop herself in time to avoid smacking up against the other wall of the rotating core. She hadn’t missed once in over a year, but it was still chancy enough that the potential to pinwheel towards oblivion gave her a thrill.

At the final moment she did reach out and grab a strand of the Skein, which instantly stopped her forward motion. Reattaching her magnetic clip, Elle let it tow her into the light.

“Is it morning, Bea?” Elle said, her tone grudging, but she smiled at Bea’s long drawl of her name. Bea had absorbed the bastardization of Elle’s name and mimicked the other colonists’ teasing tone exactly. Bea was very observant.

“Well, theoretically it’s always morning somewhere in space, Elle.” Bea had brightened her voice just a little, testing the waters to see if Elle was really ready for her day.

Elle made shooing motions with her hand. “Still remembering how to breathe.”

“All right. Five minutes while I find water for you. Then into the shower.”

As Bea trundled off to the kitchen, Elle muttered, “Space Mom.”

Elle grinned, which turned into a yawn and a stretch to help her body back into wakefulness. The webbing that held her carefully suspended between ceiling and floor in the half-gravity of the room stretched with her. She began ripping apart the Velcro strip that tethered the top of her lightweight disposable pajamas to the Skein.

With her other hand she groped for eye drops to lubricate her eyes. She had noted recently that her eyes often felt crackly if she was awakened too suddenly. It wasn’t a particularly pleas- ant sensation after nearly three months of sleep. Elle’s dry eyes were one of the very few side effects she experienced from hibernation. Or “stasis,” she corrected herself in a mildly snide mental voice.

Control really didn’t like the colonists’ use of the word “hibernation.” Their preferred term was completely detached from any association with the synthetic Hibernation Control Hormone that had been concocted from research done on hibernating bears on Earth—the very same hormone research that had nearly ended the dream of extended deep-space travel.

HCH had been tested extensively on bears in captivity, and then upon the last few found in the wild, before it ever went to human trials. An animal rights group known as Earth-First kept the bear hormone research in the news feeds daily with their guerrilla-like sorties against the actual scientists, the research facilities, and ultimately the human test agents, too. Finally Control had moved all training facilities for its deep-space cadets away from Earth completely. All cadets were now trained only on Moonbase and Marsbase to avoid any confrontations with Earth-First.

To Elle the most galling thing about the word “stasis” to describe the colonists’ hormone-assisted travel mode was that the phrase was completely detached from the colonists’ experiential reality. In theory, “stasis” sounded so serene: sleep for three months, wake up, eat, shower, visit for a few days with whatever teammates happen to be in rotation with you, then back to sleep again for another three or four light-years of travel.

Of the team of 150 travelers on board the Vera Rubin, most had reported varying degrees of lethargy and confusion upon awakening from hibernation. Many also reported dry mouth, dry eyes, inability to resume urination, little desire to eat anything, and a complete lack of interest in sex. This last problem was Control’s biggest worry. Yes, we are colonists, Elle acknowledged to herself. But she disagreed adamantly with Control’s assertion that as long as the colonists could have babies, their quality of life aboard ship could be damned.

It seemed Control felt so sure that everything else would balance out with time that they gave the green light to launch the Vera Rubin a full day ahead of schedule. Control theorized that all the negative HCH symptoms would disappear once the Vera Rubin entered the Three Sisters solar system and went into high orbit for a year around Amalie Noether, their targeted planet. Control was willing to bet the crew’s lives that normal functions would return once the colonists were off HCH completely. 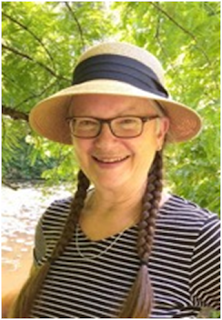 Jana Williams is certain that fiction can change people’s lives - especially women and girls.  Her own life is testimony to that fact.  One of five daughters, she was raised by a single-mom who placed a high value on reading and storytelling.

The ability to read, coupled with a child’s innate curiosity about the world, and access to books to satisfy that curiosity can offer significant opportunity to a child. Like most writers Jana has bounced from job to job, absorbing stories, cultures and customs as she worked.  She has been a high-speed motion picture photographer, a VFX coordinator, worked in the film industry, and the publishing trade as a book seller - a publisher’s rep and now an author.

But her first love is reading…. and with each book of the Freefall trilogy sold Jana will donate funds to Literacy agencies around the world whose work is to bring the joy of reading to others.

Enjoy a good adventure story and help others learn to read at the same time !