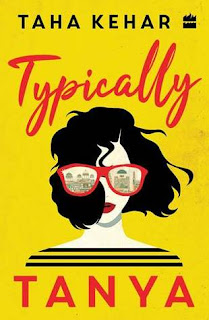 Meet Tanya Shaukat. Tanya's got a pretty good life, working for Karachi's Daily Image newspaper and smoking-drinking-flirting her way through minor romantic escapades. Sure, there are a few tiny problems. But, so far, she's been handling them well enough - in fact, she's even managed to neatly sidestep the rishtaas her mother's match-making friends keep bringing in. Arranged marriage? No, thank you. She'd like some knee-shaking love instead. But Tanya's carefree life quickly gets complicated after her (erstwhile) best friend Sonia's shaadi is called off when the groom runs away with another woman - the same groom Tanya once got intimate with on a drunken night she would rather not remember. Now it's up to Tanya to set things right.


Will Tanya manage to save Sonia's wedding? And will she finally find true love?


Taha Kehar is a Karachi-based journalist. He's written for both Indian and Pakistani magazines, newspapers and publications. He's the author of a collection of poems titled Writing Words With Fire. Typically Tanya is Taha's debut fiction.

After a long time I finally managed to lay my hands on a light read. Taha Kehar's Typically Tanya is a perfect chicklit  - hilarious, entertaining and breezy.

The story revolves around Tanya Shaukat - a lively character who manages to charm you like none other. All throughout the novel there are many portions where it is this charm of hers which saves the novel from being a complete dreary read. Written in a simple language with a tone that is bound to make you chuckle, this book is a fun read.

Seeing her life, through her eyes is quite adventurous to an extent. Tanya is one character who wears her heart on her sleeve and has no qualms about it. She comes across as someone who knows what she wants and always follows her heart, seldom thinking about the repercussions her actions might bring along. She is witty, flamboyant, go-getter and someone who can be easily called as 'Ms.Know -It-All'. She not only seems to know it all, she also seems to have a solution for all the problems in the world. I love her bond with her best friend Sonia, it reminds you how important it is to have one such dependable friend in your life. It is admirable how the author has to managed to create a female character which is so relatable in every sense. Because usually it has been observed that when male authors try writing from female perspective, the output is usually skewed in a manner that most of the issues feel unaddressed. But here, I can easily say he has done complete justice to that aspect of Tanya's character.

With a striking cover in bright hues and a blurb that promises to be much more than what it seems to say, this is one book that will leave the reader smiling, for long after having finished the book. The humour angle in the book does not look forced and has been written nicely. However, there are a few scenes in the narrative where the pace falls down drastically making those scenes drag. But as I said above, Tanya's charm helps you sail through those pages as you keep turning them to know what's happening next.  Author Taha Kehar makes Karachi come alive in those pages as you can visualize the city. His writing explores varied themes like friendship, adulting, patriarchy etc.

What did not work for me, was the usage of Hinglish (I personally detest them unless they actually add value to the narrative, which in this case wasn't happening) and also the use of certain day to day lingo, slangs and abuses. Maybe the idea was to make it as close to reality as possible. Though for me, books are the escape from reality.

Overall the plot of the story is interesting, one that has lot of drama and entertainment in equal doses.  Would recommend it to people who enjoy light reads.

This book is like Spinach and Cheese Samosa- a different take on an old favourite.