It's that time of the year! With exams done, this is the time when most of the people plan their holidays. After all, we all love to travel and unwind from the otherwise hectic schedules of life. 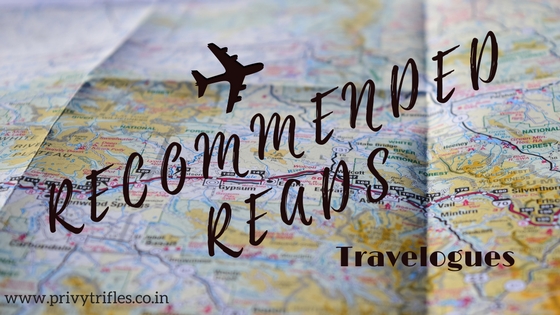 However, I am sure there are some like me who cannot travel for various reasons during this holiday season. If you are unable to travel due to work, non-approval of leaves, health or money, don't lose heart. Because today I am going to share with you a list of my favourite travelogues and I promise you, in between the pages of these books lies your ticket to freedom. (Thank me later!) After all, Dr. Seuss has said,

1. Neither here, nor there by Bill Bryson

Bill Bryson is one of my favourite go-to authors when it comes to travelogues and believe me when I said it is extremely difficult for me to pick just one favourite. However I chose this because it is the first book I read of his and fell in love with his writings.  He makes me laugh, like none another.

Bill Bryson’s first travel book, The Lost Continent, was unanimously acclaimed as one of the funniest books in years. In Neither Here nor There he brings his unique brand of humour to bear on Europe as he shoulders his backpack, keeps a tight hold on his wallet, and journeys from Hammerfest, the northernmost town on the continent, to Istanbul on the cusp of Asia. Fluent in, oh, at least one language, he retraces his travels as a student twenty years before.

Whether braving the homicidal motorists of Paris, being robbed by gypsies in Florence, attempting not to order tripe and eyeballs in a German restaurant or window-shopping in the sex shops of the Reeperbahn, Bryson takes in the sights, dissects the culture and illuminates each place and person with his hilariously caustic observations. He even goes to Liechtenstein.

2. On the road by Jack Kerouac


On The Road is considered to be a seminal post-war work, and its setting and theme make for an engaging read. The novel captures the author Jack Kerouac and his friends’ travels across North America. The author is the main protagonist in the story, and it is set against the backdrop of music, poetic literature, and drug abuse.

The book narrates the story of Sal Paradise who is the alter ego of Jack Kerouac. In the story, he meets a vivacious and energetic young man called Dean Moriarty. The book is divided into five parts and begins with Sal’s maiden trip to San Francisco. His life changes for the better when he meets Dean, and he is struck by his zest for life. Inspired, he leaves to be on the road, with just fifty dollars in his pocket. The book covers the central plot which is the conflict raging in Sal’s mind about love. The second part involves their travels and the differences with their multiple companions.

It is in the third part that the differences between Sal and Dean begin to materialise, and he becomes more and more philosophical and begins to take greater happiness in the simple pleasures of life, like listening to basketball games. The book then traces their story as they go around searching for Sal’s lost and homeless father.

Beautifully written and different for its times, On The Road is a book for connoisseurs.

3. Venice: The City of Falling Angels by John Berendt


Venice is love, now and forever. And this was the place I fell in love with that city, all over again!

Taking the fire that destroyed the Fenice theatre in 1996 as his starting point, John Berendt creates a unique and unforgettable portrait of Venice and its extraordinary inhabitants. Beneath the exquisite facade of the world's most beautiful historic city, scandal, corruption and venality are rampant, and John Berendt is a master at seeking them out. Ezra Pound and his mistress, Olga; poet Mario Stefani; the Rat Man of Treviso; or Mario Moro - self-styled carabiniere, fireman, soldier or airman, depending on the day of the week.

With his background in journalism, Berendt is perfectly poised to gain access to private and unapproachable people, and persuade them to talk frankly to him. The result is mischievous, witty, compelling - and destined to be the non-fiction succes d'estime of the year.

4. Behind the beautiful forevers by Katherine Boo


P.S: This book will show you a Mumbai, you have never seen before!

Behind The Beautiful Forevers: Life, Death And Hope In A Mumbai Undercity was written by the Pulitzer Prize-winning American investigative journalist, Katheirne Boo. This book is a documentary of the writer’s experiences in a Mumbai slum called Annawadi between November 2007 and March 2011. The story in this book primarily focuses on three main families. Abdul, belonging to one of these families is an expert in shifting garbage from one place to another.

One Leg, a cripple living in Annawadi, has sexual desires that can’t be fulfilled by her husband. Another important chracter in this book is Asha, a political worker belonging to the Shiv Sena party. She is the most ambitious person in the book, and hopes to become a slumlord one day by treading the tried-and-tested path of political corruption.

In Behind The Beautiful Forevers: Life, Death And Hope In A Mumbai Undercity, though the characters all belong to an impoverished background, they still share the common emotion of hope. Hope is the only thing that keeps them from falling apart in their bleak existence. This book portrays how poor people are alienated into staying poor all their lives by the richer sections of society, from whom they barely recieve any help.

For the people living in Annawadi, earning enough money to become a part of the middle-class is a grand dream that most cant acheive. This book portrays the story of how Abdul the garbage shifter is falsely implicated in the murder of his neighbour, Fatima. Behind The Beautiful Forevers: Life, Death And Hope In A Mumbai Undercity is a compelling depiction of real-life people living in an impverished Mumbai slum.


Any list of recommended travelogues is incomplete without this masterpiece!

It's 3 a.m. and Elizabeth Gilbert is sobbing on the bathroom floor. She's in her thirties, she has a husband, a house, they're trying for a baby - and she doesn't want any of it. A bitter divorce and a turbulent love affair later, she emerges battered and bewildered and realizes it is time to pursue her own journey in search of three things she has been missing: pleasure, devotion and balance. So she travels to Rome, where she learns Italian from handsome, brown-eyed identical twins and gains twenty-five pounds, an ashram in India, where she finds that enlightenment entails getting up in the middle of the night to scrub the temple floor, and Bali where a toothless medicine man of indeterminate age offers her a new path to peace: simply sit still and smile. And slowly happiness begins to creep up on her.

P.S: Don't forget to let me know how your trip was.