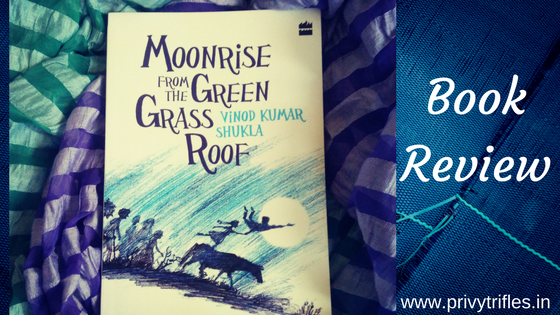 
There were a hundred games the children played with the sky. Each question that arose in a child's mind was a game. 'Where is the moon?' they asked if they woke up in the middle of the night.

There's a pygmy mountain at the edge of the village. Near the top of the mountain is a mysterious hole. If you toss a stone down that hole, it will keep falling until you return to hear it hit the bottom.

There's a second-grader named Bolu in the village school. He only speaks while he walks. If you want to speak to him, you must walk with him. And then there's the moon, rising from the green grass roof. It travels with Bolu and his friends wherever they go.

In this book, light as pebbles skimming across a pond, Vinod Kumar Shukla speaks of the wonder of a universe in which, however separate we seem, we are inevitably joined as one.


Vinod Kumar Shukla (born 1 January 1937) is a modern Hindi writer known for his surreal style that often borders on magic-realism and sometimes move beyond it. His works include the novels Naukar ki Kameez and Deewar Mein Ek Khirkee Rahati Thi (A Window lived in a Wall), which won the Sahitya Akademi Award for the best Hindi work in 1999.

Vinod Kumar Shukla was a guest littérateur at the Nirala Srijanpeeth in AGRA from 1994 to 1996 during which he wrote two novels Khilega To Dekhenge and the refreshing Deewar Mein Ek Khirkee Rahati Thi. The latter has been translated into English by Prof. Satti Khanna of Duke University as A Window Lived in a Wall.

For the love of translations, this book has been an extremely special read. I could go on and on about it in my mind but when it comes to writing a review I am wondering where to start from. Should I talk about the beautiful cover first? Bathed in shades of blue, it looks like beautiful sketch done with crayons. All chapters of the book have amazing sketches that set the tone for a reader before the story progresses ahead. I simply loved how the whole typesetting is done in a manner that it matches the overall tonality of the book, story and the plot.


“In this book, light as pebbles skimming across a pond, Vinod Kumar Shukla speaks of the wonder of a universe in which, however separate we seem, we are inevitably joined as one.”


And the book does justice to each and every word mentioned above. Depicting the magical world of children and their boundless imagination, this book takes us to the world of Chhotu, Bolu, Bhaira and many others. Blessed with special abilities, each one of them is unique in their own way. The possibilities are infinite given this combination and that is exactly what the author shows in his book. Translated from Hindi by Satti Khanna, the book someone lacks in recreating the magic at many places, especially the poems leaving the reader curious enough to read the original Hindi book (Hare ghaas ki chappaar wali jhpdi aur bauna pahad) to grasp their meaning in the truest form.

The characters are very well endowed and are truly endearing. The plot surges ahead transporting a reader into an alternate universe where simplicity and innocence rule the roost. The language is lucid yet there are certain passages where the emotions seem to have been lost in translation.

However, having said all of the above, this book still will be a perfect read for children with loads of magic and masti hidden in those pages for them. Recommended for sheer competence of the author to make you relive your childhood through this book!

This book is like Minapa Roti - simple in looks but perfectly delectable in taste!