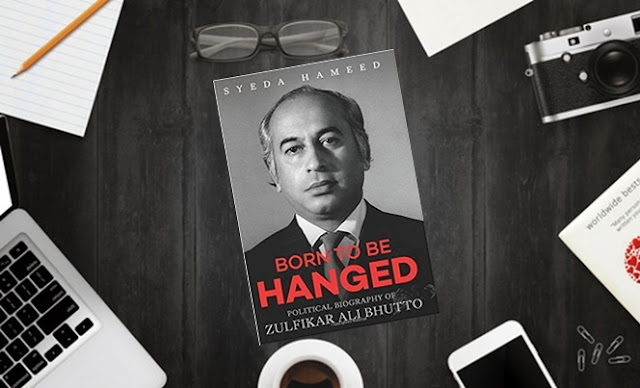 Pakistan’s former Prime Minister Zulfikar Ali Bhutto held the reins of the country from 1971 to 1977. He was overthrown in 1977 by his Chief of Army Staff, General Zia-ul-Haq and executed in 1979. Zia-ul-Haq ruled over Pakistan for eleven years with an iron fist, curbing all dissent until he got blown up in an air crash in 1988. In almost three decades since, Pakistan’s leadership has changed hands fifteen times. An extremely controversial and confrontational politics is associated with the era of Zulfikar Ali Bhutto. It is therefore not surprising that, considering his towering stature, not enough has been researched and written about the tumultuous years of his accession to power culminating in what today is best described as regicide. Syeda Hameed delves deep into the politics of Pakistan, meeting Bhutto’s contemporaries, mining information from archives and letters to bring to the fore a rich yet disturbing life and times of Zulfikar Ali Bhutto.

Syeda Saiyidain Hameed is an Indian social and women's rights activist, educationist, writer and a former member of the Planning Commission of India. She was awarded the fourth highest civilian honour—the Padma Shri—in 2007, for her contributions to the Indian society. She lives in New Delhi.

Before I start the review of the book I would like to talk about its cover. With a sand paper feel and an amazing sketch on the inside, the moment I held this book in my hands I knew it was special. It is nothing like the usual books that you see nowadays ( not even like the other hardcovers!). This beauty is really a piece of art when it comes to design and kudos to the brilliant team at Rupa for it. The last cover I ever remember that had a tale of its own to tell just by the feel was Cobalt Blue.

Now coming to the book, Zulfikar Ali Bhutto has been a person who has commanded immense respect all throughout his life and even after his death. He is considered to be one of the key persons who changed the face of politics in India, he ruled with an iron hand,a trait inherited by his daughter Benazir. His death has always been considered a key incident, one that can easily be called a game changer for Pakistan as a country and it was intriguing to read what all lead to his death.

This book comes across a well researched biography where his whole life is depicted in a manner that makes us see ZAB ( as he is addressed in the book) as a father, a husband, a son and all the roles he played apart from being a fierce leader. Though it is a political biography, without divulging much about his personal aspects it still gives us brief glimpses of his life apart from being a political leader. It is heartwarming to see the other side of his fiery persona, as someone who is affable, affectionate and caring. The letters to his children is something that left me teary eyed.

It is so difficult to imagine someone like him, write so tenderly. And yet, we all know there is always a part of us which is never for the world to know. It is for our loved ones, only. This book makes you privy to that side of ZAB in a manner that you cannot help but be mesmerized with his personality. He was a visionary, with a deep foresight of the future and equally calculative when it came to taking risks. After reading this book I can clearly state his story is inspiring and one that also depicts the ugly aspect of politics very well. The hunger for power, the zeal to have it all and the determination to do anything to achieve that - this book talks about all these things , bringing alive the heady giddiness which one experiences on having done it finally. His foray into politics and journey to becoming the Prime Minister is nothing short of a masala Bollywood movie. There is thrill, drama, suspense and all that makes it an exciting read. Written in engrossing manner, the book captures his life very well. After reading this book, my respect for him increased manifold.

This book is like guava ice cream - unique, refreshingly different!