Book Review: The Assassinations- A Novel of 1984 by Vikram Kapur 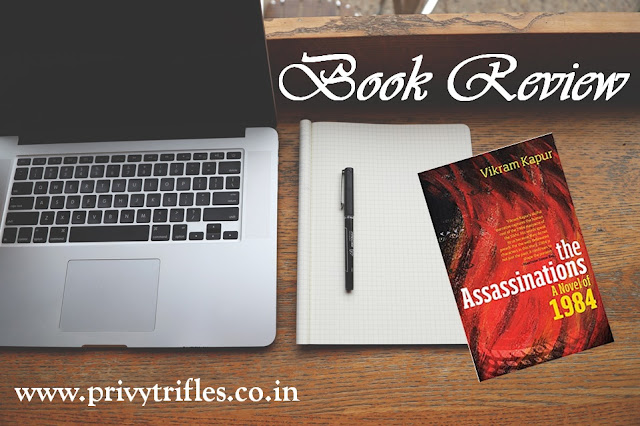 To Deepa, Prem gave no hint of the churning inside him. In front of her he affected a cheery demeanour, indulging her in her plans for their honeymoon, which she kept revising. It was a welcome escape from the mayhem surrounding him. There were occasions where the pretence got to him and a voice rose inside, urging him to tell her everything. He silenced it. Deepa was a Hindu and would never understand. Until then, he had never thought of her as different.

Prem Kohli, the handsome, ambitious son of a Sikh refugee, has the world at his feet. A glittering career lies ahead, and he has just got engaged to his college girlfriend, Deepa, overcoming her parents’ reservations about Hindus and Sikhs intermarrying. But, while Deepa remains occupied with their marriage plans, the Indian Army enters the Golden Temple. Prem cannot contain his rising anger at the desecration of the shrine and at the people around him who shrug it off as ‘teaching a lesson’ to the Sikhs. He begins growing out his hair and beard, and visiting the gurudwara regularly, where he learns about the militancy in Punjab. Matters come to a head a few months later, when Prime Minister Indira Gandhi is assassinated and anti-Sikh riots break out all over Delhi, as Prem is caught up in a vortex of violence and hate that threatens to engulf all of their lives.

In The Assassinations, Vikram Kapur writes with sensitivity about a topic that still holds painful memories, skilfully telling the story of how ordinary lives are distorted by the forces of history. At the same time, he masterfully evokes the New Delhi of the 1980s, with its wide, leafy roads masking the precariousness of its Punjabi middle class. This memorable book captures the turbulence of those times, while chronicling the ways in which continuing to live means coming to terms with many kinds of deaths.

‘A love torn apart by violence. A nation at odds with itself. Vikram Kapur's skillful narrative captures the human cost of the 1984 massacre of the Sikhs. His words speak to us because they do not preach. For the well-delineated characters in this story, 1984 is not just the past; it continues to shape the present.’ —Hartosh Singh Bal

‘Vikram Kapur's novel, well-thought-out and carefully structured, is at the same time a family saga and the sensitive portrayal of one of the most tragic episodes in recent Indian history […] He demonstrates how the politics of hatred can tear people and communities apart, [bringing] this story from the 1980s to our own traumatic times.’ —K. Satchidanandan

Vikram Kapur is the author of two other novels, Time Is a Fire and The Wages of Life, as well as the editor of an anthology of short fiction and nonfiction on the anti-Sikh riots of 1984 called 1984 in Memory and Imagination. His work has been published widely in India and abroad. His short stories have been shortlisted for major international prizes including the Commonwealth Short Story Prize, as well as being broadcast over the radio. He has received a number of international writing fellowships. He is currently an associate professor of English at Shiv Nadar University. His website is www.vikramkapur.com

Every time I read a book about the history of India, I am pained beyond words to know that something so beautiful has such a bloodied past. 1984 is a year etched in my memory because it’s my birth year and it was much later that I came to know how important a year it was in Indian history with the death of the then prime minister Indira Gandhi and the subsequent events before and after.

This book opens up those wounds of that time, taking up back into the era where life looked peaceful but the quietude was of one before the storm. More than the how, when and what, it is always the why that has fascinated me. And that is where the author scores a brownie point. This book answers every why that came to my mind, not only about the story but also about the real incidents around which the story has been woven. In lucid language and with buoyant descriptions the author brings alive the Delhi of the 80s, the simple and uncomplicated lives we had before it all got complicated beyond repair.

Deepa and Prem, the primary characters are well etched, described in strong tones they are attention seeking from the first page. As a reader, you are bound to be pulled into their story. The charm and innocence of Deepa is touching and Prem’s progression from a young lad madly in love to an opinionated man grows onto you. There were many scenes which choked me up, with their descriptions… the fear so palpable and the anger, relatable. This story left me feeling gloomy with tears in the end. I have always wondered how can a fellow human being gather so many anger to do this to another and have never found an answer. I have just been told, “You will never understand.” Perhaps I won’t because if the answer looks so gruesome then I never want to understand.

This book can be called a brilliant attempt at answering that 'why' for me. A lot that I never realized as the other side of the story, was revealed to me here. I enjoyed the way the author has kept the language lucid and brought out the harsh reality to the forefront allowing it to do the talking.

With strong characters, powerful narrative and engaging plotline this story is a must read for every history lover, drama lover, fiction lover and just a lover. It depicts the various definitions of love and relationships so well.

This book is like sponge cake - inviting, exciting, soft, melts in the mouth and lingers on your taste-buds for long.