Book Review: A Time of Madness - A memoir of Partition by Salman Rashid 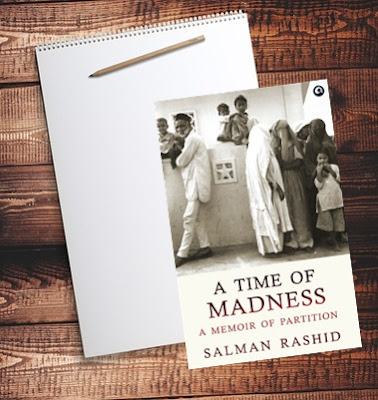 During the chaos of Partition in 1947, something dreadful happened in the city of Jalandhar in Punjab. As a result of this, Salman Rashid’s family fled Jalandhar for Pakistan, the newly created country across the border.

They were among the nearly two million people uprooted from their homes in the greatest transmigration in history. Besides those who fled, other members of the family became part of a grimmer statistic: they featured among the more than one million unfortunate souls who paid with their lives for the division of India and creation of Pakistan.

After living in the shadow of his family’s tragedy for decades, in 2008, Rashid made the journey back to his ancestral village to uncover the truth. A Time of Madness tells the story of what he discovered with great poignancy and grace. It is a tale of unspeakable brutality but it is also a testament to the uniquely human traits of forgiveness, redemption and the resilience of the human spirit.

Salman Rashid is Pakistan's leading travel writer. The author of nine travel books, this is his first memoir.

My first read of the year and I am so glad it was this beautiful, heartbreaking and touching book. There is something about Partition that always leaves me all teary eyed. Weird for someone who was neither born in that time nor has any family history of being remotely associated with that incident. But still since the time I have ever read about it, I feel something tearing up inside me. As I type this, there is a storm inside my head which is usually the case after reading books on Partition for I always wonder how can a fellow human being do this to another.

Usually the books of Partition that I have read so far can be segregated into three categories. One is where they talk about the past, describing all that happened in both the countries. Second category is one where they talk about how their families and lives got affected by the Partition. The third category, a very rare one at it, is one where they try to trace back their roots to make peace with the past and move on in the present. This book falls in the third category and that is one of the reason why it is 'heartbreaking-ly' beautiful.

The sepia toned cover sets the perfect tone for the story of the bygone era. The author has managed to pour out his heart onto those pages with utmost honesty and lends a certain poignancy to the narrative with this straight from the heart tone. The author, who is an acclaimed travel writer, makes the descriptions come alive. The result is a book which is picturesque, moving and at the same time heartwarming. With lucid language, he manages to bring out his deepest fears and darkest secrets in the book with a lot of grace. I admire the way he thought of tracing back his roots and visiting his ancestral village to make peace with his past. It is not an easy decision. Not only emotionally but also otherwise. I know of people who have been pining for that one glimpse of their 'home' and are stuck between financial and visa issues.

When the author talks about the Partition, it is painful to read those passages. Some of them gave me goosebumps, the brutality of it all so evident. But then at the same time, we also have instances of undeterred strength and resilience, love and compassion which strike a chord somewhere. The power of forgiveness couldn't have been depicted more beautiful.

Strongly recommended for its poignancy, honesty and most importantly heartwarming narrative.