Guest Post: The Story Behind The Stranger By Anna del Mar

Today we have Anna del Mar, the author of The Stranger with us. Anna del Mar writes hot, smart romances that soothe the soul, challenge the mind, and satisfy the heart. Her stories focus on strong heroines struggling to find their place in the world and the brave, sexy, kickass, military heroes who defy the limits of their broken bodies to protect the women they love. Anna enjoys traveling, hiking, skiing, and the sea. Writing is her addiction, her drug of choice, and what she wants to do all the time. The extraordinary men and women she met during her years as a Navy wife inspire the fabulous heroes and heroines at the center of her stories. When she stays put—which doesn’t happen very often—she lives in Florida with her indulgent husband and two very opinionated cats. She can be reached at: 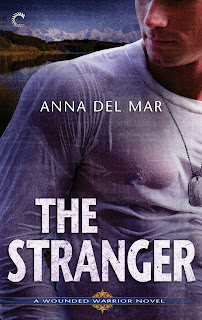 Isn't that an awesome cover? If you are curious to know whats the book about, here's a sneak peek for you:

When a mysterious stranger is your only hope...

The scars of the past have left their mark, both physical and emotional, on former military pilot Seth Erickson. Off-grid in the far reaches of the bitter Alaskan wilderness, he wants only to be left alone with his ghosts. But he can’t ignore a woman in need—beautiful, stranded and nearly frozen with fear.

Summer Silva never imagined that the search for her missing sister would leave her abandoned on a wintry back road, barely escaping with her life from a cold-blooded killer for hire. Now, hiding out in the isolated cabin of the secretive wounded warrior who saved her, Summer knows she must do what she fears most. Putting her trust in a stranger is all she has left.

All defenses are down

After a fiery first night together, Seth and Summer are bound by a need as powerful as a Bering Sea superstorm—and vulnerable to enemies just as fierce. For Seth, reawakened by desire, there is no sacrifice too great, no memory too dark, to keep Summer safe. But murder and treason lurk everywhere and Summer may not survive Alaska’s ruthless winter.

Curious enough? Now, lets listen to the story behind the book:

I never really wanted to go to Alaska BAK, Before Adventuresome Kids. San Francisco and New York? Sure. London? Check. Rome and Paris? Absolutely. Alaska? Not so much. That is, until my daughter insisted on a trip that led to my son volunteering at Denali National Park. Each time I went back to Alaska, I fell deeper for it. So I kept going back for more.

From this personal, life-transforming journey comes my latest romantic suspense, The Stranger, the story of Summer Silva, a warmth-loving Miami architect who chases her reckless sibling to Alaska when her sister runs away with a guy she met on the internet. Summer is a tropical being, kind of like me, and yet as her story begins, we find her stranded on a desolate Alaskan road, having just survived a murder attempt with a Bering Sea superstorm bearing down on her.

The Stranger who reluctantly comes to her aid is Seth Erickson, an Alaskan tycoon with a quarreling family as complicated as Summer’s own. Seth is also a helicopter pilot, a wounded warrior struggling to recover from injuries he sustained while serving in Afghanistan. He’s got no time for a lady in distress and yet he can’t just abandon Summer to fend for herself. When they shelter in his high-tech cabin and she comes to his bed, he embraces her sweet seduction. Entwined in his arms, she becomes the superstorm of his lifetime.

But Summer has a secret. Dream chasing, the Native Athabaskans call it. You’ll have to read the novel if you’d like to know more about it. Yes, I’m grinning. And now two strangers from different worlds and opposite spectrums of the thermometer are caught in a vortex of passion that defies their differences and enrages their enemies. To survive, they must unravel the intrigues that threaten their lives and chase after a new dream in spectacular Alaska.
* * *

P.S: Here’s a first review of The Stranger. And it’s an awesome one!