There's a man who always sits at a particular table at a particular café on a particular beach and orders a particular coffee, time after time, every Sunday. He even wears the same shirt. He sits there for exactly twelve minutes, finishes his coffee, pays for it with the exact change, down to the exact number of coins each time, walks up and down the beach thrice, before getting into his car and driving away.

You may observe him and call him a man of habit and leave it at that. I look at him and imagine that he's in love with the lady who cooks the fish at the café – the lady who only works there on Sundays, and is thinking of ways to ask her to marry him, but can't make up his mind because he's got a family waiting for him at home.

I pray that I never see him.


My mind has a mind of its own, and I'm still not used to it. I see houses on stilts when I see a tortoise, and a rainbow's shadow when I look up at the night sky. I can almost see the ocean falling away into an immense waterfall just over the horizon, where the sun sinks into it.

Imagination is not what everyone thinks it is. It’s not separate from one’s own self. It’s not something that only certain people are blessed with. When I sit down to write something, whether it’s a short article like the one you’re reading, or a slightly longer story that I can call a book, I don’t call upon my reserves of imagination to come to my rescue. You may know people who are good at writing, drawing, design, illustration, and any of the other hundreds of skills that are traditionally attributed to a ‘good imagination’ or a ‘creative’ person. You may think that you’re not creative enough or imaginative enough to do something that’s not boring, something that’s out of the box, or something that makes you stand out while standing in the conveyor belt of the rat race you’re trying to win. If you do, you would be terribly wrong. And you’d be doing an injustice to yourself and what you’re capable of..

Anyone can be a storyteller. You may not necessarily have to be a writer to tell a story. All you need is a medium that suits your strengths. Don’t sell yourself short, even to yourself. If you have a story that you have to tell, then say it. Sing it out, write it, put the story down in bullet points and enact it like it’s a play – the medium doesn’t matter. The story does. Your story is far more important than you realize. Don’t let the storyteller sitting inside you die of boredom and disuse.

Great stories are not built upon the pillars of great language skills. They are built upon the storyteller’s imagination. They are built upon a storyteller’s ability to narrate an incident. Remember those lies we all used to tell when we wanted to get out of school or a Monday morning at work? Those are great stories. Those are the tips of enormous icebergs of imagination that’s within all of us. 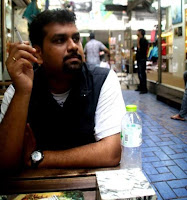 Nikhil Kumar is the author of recently released Anya's Lyric. He is an advertising professional living in Bangalore, with his wife Mansi Pal and has been blogging for about 12 years. He writes primarily on Mirror Cracked and contributes to a travel blog called Chai Around The World, which he maintains with his wife. Nikhil has written four books so far. You can reach him at the following: